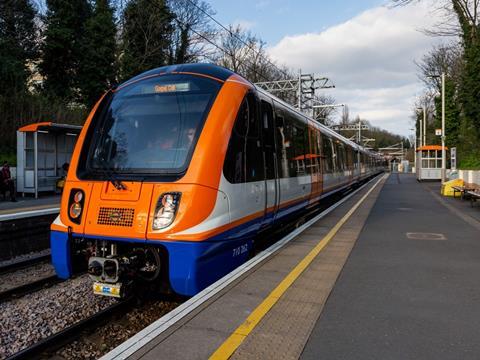 The eight four-car trainsets, of which six are required for regular services, replace the fleet of two-car DMUs that operated the orbital inner-suburban line before it was electrified at 25 kV 50 Hz last year.

The launch of electric services was delayed by problems with the Bombardier Transportation EMUs. As an interim measure, three existing Class 378 EMUs used on other London Overground routes were temporarily put into service on the Gospel Oak – Barking route, as the DMUs had to be cascaded to routes in the West Midlands. This meant that the frequency of services had to be reduced, although overall line capacity was maintained through the use of the longer trains. With the full Class 710 fleet now in service, TfL’s specified timetable of a train every 15 min can now be reintroduced.

Free travel from August 31 to October 1 is being offered as compensation for the late arrival of the new fleet. This is to be funded by Bombardier Transportation.

Class 710s to come to other routes

The first Class 710 EMU entered passenger service in late May; Bombardier is maintaining the fleet at its Willesden depot. The walkthrough trains from Bombardier’s Aventra family have capacity for 675 passengers including 195 seated; there are also spaces for wheelchairs. The trains have 36 USB charging sockets, wi-fi supplied by Icomera, and LCD advertising and real-time passenger information screens. The air-conditioned vehicles are equipped with ‘intelligent’ lighting and temperature control. Maximum speed is 120 km/h.

Bombardier Transportation is supplying a total of 54 Class 710 trains to TfL from its Derby factory. This includes a base order of 45 four-car trainsets under a contract awarded in 2015 that includes options for up to 96 more units; TfL exercised an option for nine in 2017. The base order covers 31 trains equipped for 25 kV 50 Hz overhead electrification and 14 dual-voltage units also able to operate on 750 V DC third-rail. The six five-car and three four-car sets in the option are all dual-voltage variants.

Class 710 units are to be deployed on the Euston – Watford route as well as the West Anglia routes running from Liverpool Street. TfL expects the first Class 710s for both of these routes to be in service by the end of the year.

In the longer term, three additional trains would be required on the Gospel Oak – Barking Line once the extension to Barking Riverside opens. Work on the 4·5 km, one-station extension is being undertaken by a joint venture of Morgan Sindall Construction & Infrastructure and VolkerFitzpatrick, and is expected to be completed in 2021.

London Overground services are operated by Arriva Rail London on behalf of TfL under a 7½ year concession that commenced on November 13 2016.