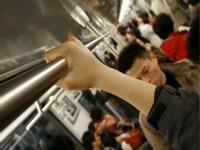 An agreement with China for the construction of the line was signed in May 2014 and civil works began, but progress was hindered by protests.

The Chief Minister of Punjab, Shahbaz Sharif, said a verbal agreement has been reached for the line to completed within 27 months using Chinese technology. China Railway and China North Industries Corp could subcontract electrical and mechanical works to local companies.

The 27·1 km Orange Line would run from Ali Town and Niaz Beg to Dera Gujjaran, with around 25·4 km of the route elevated and 1·7 km in cut-and-cover tunnel. Ridership is estimated at 250 000 passengers/day.