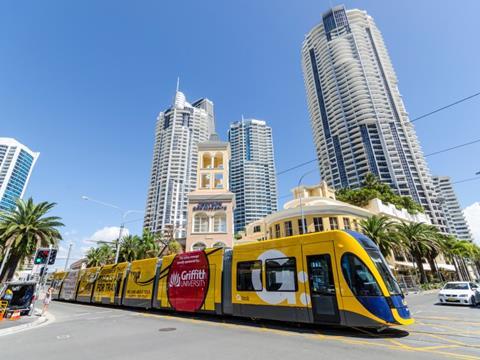 Turnbull’s predecessor Tony Abbott refused to provide federal funding for urban rail projects, but was replaced as Prime Minister on September 15. All three levels of government have now committed to fund the extension, with the city council providing A$55m and the state of Queensland earmarking money from the transport budget.

The 7·3 km northern extension would run from Gold Coast University Hospital to Helensvale, where interchange would be provided with Queensland Rail services to and from Brisbane. It is scheduled to be completed in time for the 2018 Commonwealth Games, which the city is hosting. Five games venues would be on the extended route.

Six consortia have expressed interest in the project, and tenders must be submitted by December 23. The Queensland government expects to select a preferred bidder in early 2016.

The initial 13 km phase of the G:Link line opened in July 2014 from University Hospital to Broadbeach and is operated by the KDR Gold Coast joint venture of Keolis and Downer Rail.

‘Light rail has become the backbone of the public transport network and Stage 1 has driven a 25% increase in public transport patronage on the Gold Coast in the first year alone’, said Queensland Deputy Premier Jackie Trad. According to Gold Coast Mayor Tom Tate, ridership now averages more than 18 200 passenger-journeys per day.