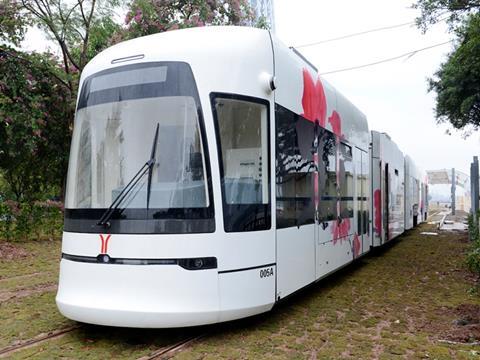 CHINA: The fifth modern tram line in China opened on December 31 in Guangzhou. The 7·7 km east-west Haizhu Line with 11 stops is first phase of a planned circular route in Haizhu district.

Services are operated by Guangzhou Metro Corp subsidiary Guangzhou Tram Co Ltd. During the trial operation period, due to run until February, services run every 13 min between 9.00 and 17.00. Fares are set at 2 yuan.

CSR Zhuzhou has supplied seven 100% low-floor trams. These were ordered in June 2013 and arrived in Guangzhou between September 28 and December 20. The four-section trams are powered only by supercapacitors and include drive components supplied by Siemens under a technology licensing and co-operation agreement. Maximum operational speed is 70 km/h.