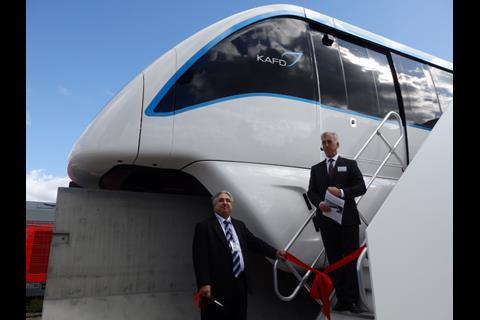 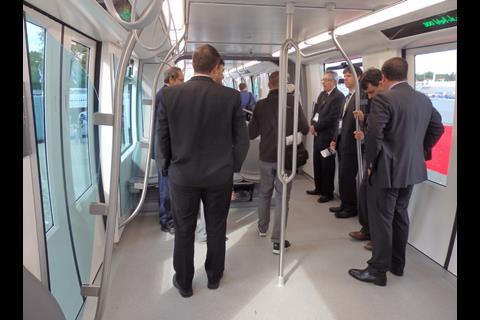 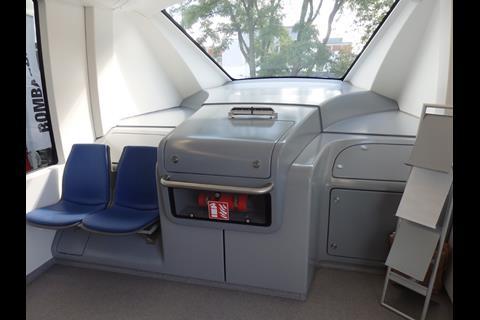 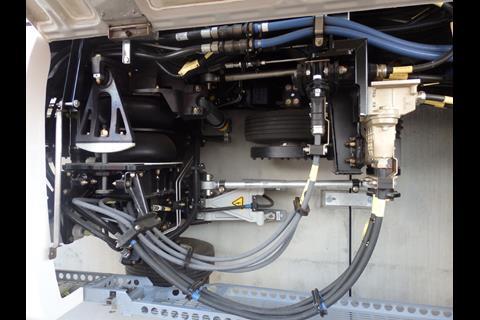 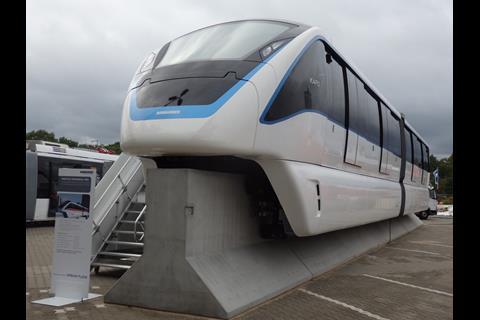 The vehicle stopped off in Berlin while being delivered to Saudi Arabia from Bombardier’s monorail centre in Kingston, Canada.

The KAFD developer Al Ra'idah Investment Co was the launch customer for the Innovia 300 monorail. Turnkey construction contractor Saudi Oger signed a US$241m contract with Bombardier in 2010. Systra advised on the project.

Attendu said the Innovia 300 rubber-tyred driverless straddle monorail is ‘a game changer for urban transport’, with its ‘futuristic’ appearance and low land-take making it ‘the perfect choice for fast-growing cities’.

Bombardier is supplying six units for the KAFD line, which will have six stations on a 3·6 km elevated loop. The 29·5 tonne two-car sets are 26·7 m long and 3 142 mm wide, with a high-capacity interior having an off-set aisle to enable passengers to move around the central bogie which protrudes into the passenger saloon. The bodyshell and many components are derived from light metro cars supplied to Vancouver, Kuala Lumpur and elsewhere. The traction equipment includes Mitrac TM 600PW controls and permanent magnet motors, giving a maximum speed of 80 km/h.

While the KAFD line is designed for short hops between buildings, the second Innovia 300 order covers a 24 km high-capacity route which will form Line 15 of São Paulo’s metro network. This will have 54 seven-car trainsets and is designed to carry up to 48 000 passengers/hour in each direction. Bombardier says this offers a higher capacity than surface light rail, with lower land-take than an elevated light rail line and lower costs than an underground metro. The initial section with two stations is now in operation.