Freight tram-train to be tested in Karlsruhe 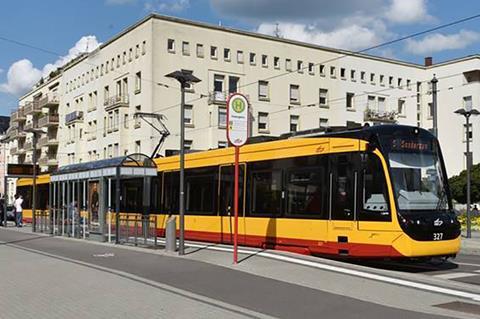 GERMANY: Trials with a prototype freight tram or tram-train are to start in Karlsruhe and the surrounding area in 2022. The concept is being drawn up with a view to improving urban life by reducing road traffic and the emissions it generates.

Known as ‘regioKArgo’, a pilot operation is proposed to demonstrate the concept, possibly on the 50 km Karlsruhe – Rastatt – Achern route, which has been studied in detail by the project’s promoters.

Increasing use of the internet in recent months to order goods has led to an increase in package delivery traffic, in turn leading to congestion and other problems such as a shortage of staff and delivery vehicles.

Freight trams or tram-trains would operate between consolidation centres, set up at locations outside Karlsruhe and surrounding towns, and ‘city-hubs’ in the central area of each town. From there goods would be distributed to the end customer using emission-free methods such as cargo bikes. Studies are in hand to determine where city-hubs could be located.

One option would be to use modified trams that would be dedicated for passenger duties during peak times but would carry both passengers and cargo during less-busy periods. A team of researchers and industry experts is working on the design of a demonstrator tram under the LogIKTram project, the results of which will be fed into the regioKArgo scheme.

Organisations involved in the project other than operators include DB Engineering & Consulting, the Karlsruhe Institute for Technology, the FZI IT Research Centre, Marlo Consultants and Automotive Engineering Network.

The project team is in the process of estimating the likely cost, the aim being to apply for funding under the ‘Regio-Win’ project which promotes Karlsruhe as a technology development centre. Research by Offenburg University suggests that users would be willing to pay for the service if it fits sustainability and environmental goals.

Freight trams would form the centrepiece of a holistic concept which will entail rethinking the existing freight transport delivery model, according to Ascan Egerer, Technical Director at AVG. Explaining that the whole process was being examined to ensure that it would function economically, this entailed looking at what happens before and after the rail leg of a consignment’s journey. ‘That’s why we have partners from all sectors round the table’, he said. ‘It’s not something that can be solved by a transport operator alone. And we are talking about going beyond the city limits into the region’.

Egerer suggested that the idea was to replicate for goods the tram-train concept for passengers that was pioneered in Karlsruhe in the 1990s. ‘The Karlsruhe model offers the best conditions for bringing about a switch for goods transport too’, he said.

The ‘father’ of the Karlsruhe tram-train concept was Dr Dieter Ludwig, who believed that it was necessary to ‘take the train to the people’. Dr Ludwig, who died on July 16, was CEO of AVG and VBK for 30 years, during which the Karlsruhe model became famous – the first route between Karlsruhe and Bretten opened in 1992, leading to spectacular growth in the use of public transport in the area.