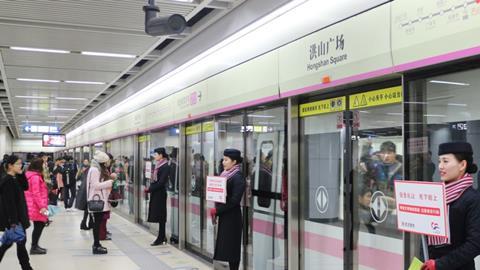 CHINA: The first phase of Wuhan metro Line 8 was opened for revenue service on December 26, along with a short extension of Line 1 and the east-west Yangluo Line suburban metro.

Line 8 runs fully underground from Jintanlu in the northern part of the city to Liyuan in the southeast. The 16·2 km first phase with 12 stations is the third metro line in the city to cross the Yangtse River, passing beneath the river in a double-track bore 3 186 m long, at a depth of 51 m below the water surface. Interchange is provided at four stations: with lines 2 and 3 at Hongtu Boulevard, with Line 3 at Zhaojiatiao, with Line 1 at Huangpulu and with Line 4 at Yuejiazui.

Construction of Line 8 had been approved by National Development and Reform Commission on April 24 2013. With the first phase already underway, work began in 2016 on two further sections which are scheduled to open in 2019 and 2020. Continuing southeast from Liyuan to Junyuncun; these will bring the total length of Line 8 to 39 km with 26 stations. A northern extension from Jintanlu to Hankou is also planned.

Line 8 services initially operate from 06.30 to 22.30. The line is worked by a fleet of 47 six-car Type A trainsets, which are currently stabled at the Line 3 depot, using a connecting link that opened on the same day. All stations have been built to accommodate eight-car trainsets in the future.

December 26 also saw the opening of a 3·9 km extension to the elevated metro Line 1, from the former terminus at Dongwu Boulevard to Jinghe, adding three stations. This brings the total length of the route, which initially opened in September 2004, to 37·9 km with 32 stations.

Serving the left bank of the Yangtse River, Line 1 is operated by a 60-strong fleet of B-type four-car trainsets. However, the stations on the latest extension have been designed to accommodate five-car trains in the future.

The third line to open is the 34·6 km Yangluo Line, which runs from Houhu Boulevard to Jintai, serving 16 stations with an average spacing of 2·2 km. Also known as Line 21, this suburban route is designed for a maximum speed of 100 km/h; it is initially being worked by a fleet of 25 four-car Type A trains supplied by Zhuzhou CRRC Times Electric, although the stations have been build to accommodate six-car sets.

During December, Wuhan began the construction of two more metro lines: the 59·9 km ring Line 12 with 37 stations and the 36·5 km Qianchuan Line with 11 stations.