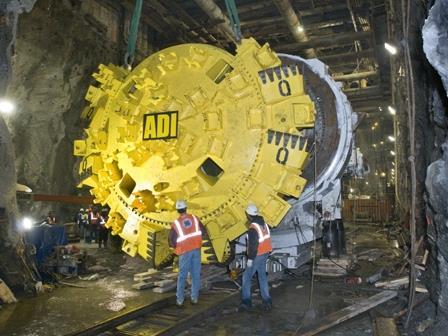 USA: Tunnelling for the first phase of New York’s Second Avenue Subway project got underway on May 14 when a 485 tonne TBM began boring through Manhattan bedrock south from a launch pit between 96th Street and 92nd Street.

The machine will dig two tunnels, each around 2 350 m long, to create a double-track line which will connect with an existing route at 63rd Street. The work is expected to be completed by November 2011, about five years before revenue service is scheduled to begin. Phase I will initially operate as an extension of the Q Line from 96th Street to 63rd Street, carrying more than 200 000 passengers/day.

The TBM itself is more than 30 years old, having been built to dig the 63rd Street tunnel in the late 1970s. Since then it has been used on at least four other projects in different parts of the USA, and was rebuilt before starting the current project.

Subsequent phases of the Second Avenue project will take the line north to 125th Street and south to Hanover Square in lower Manahttan. The completed line will have 16 stations.

‘There have been sceptics who saw construction start and stop in the 1970s and said the Second Avenue Subway would never be built,’ said MTA Chairman & CEO Jay Walder. ‘But we are turning on the machine that will dig the Phase 1 Second Avenue Subway tunnels, and we won't turn it off until the tunnels are done.’