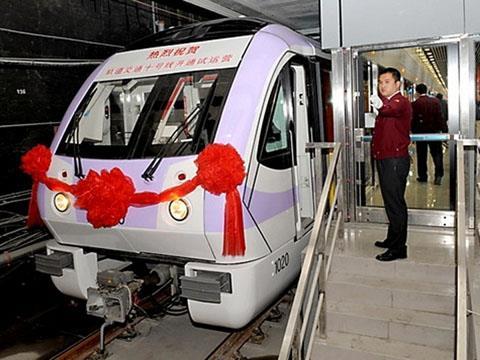 CHINA: The departure of the first train on Shanghai metro Line 10 at 09.00 on April 10 signalled several significant achievements. The start of trial operation on Line 10, exactly 15 years to the day after the inauguration of the first section of Line 1, makes Shanghai's metro network the longest in the world, at 420 route-km. With 11 lines and 282 stations, it is now carrying more than five million passengers per day.

Construction of the 29·6 km Line 10 between Xinjiangwancheng and Hangzhong Road has taken four years. Since the trains, signalling and other equipment are still being commissioned, operation is initially restricted to 09.00 - 16.00, but the four-station branch from Longxi Road to Hongqiao is not yet open.

A branch of Line 11 from Jia Ding Xin Cheng to An Ting entered service two weeks earlier, on March 29. This was quickly followed by a one-station extension of Line 9 from Century Avenue to Middle Yanggao Road on April 7 and a 26·8 km eastern extension of Line 2 between Guanglan Road and Pudong International Airport on April 8.

More routes were due to open before the World Expo started on May 1, notably the first stage of Line 13 from Ma Dang Road to Chang Qing Road, serving the Expo site.