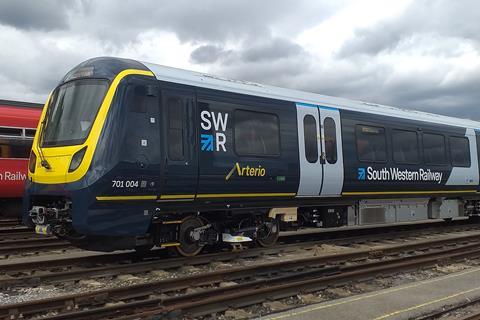 UK: South Western Railway has announced Arterio as its brand name for the fleet of 90 Class 701 electric multiple-units which Bombardier Transportation is supplying for use on suburban services from London Waterloo station. 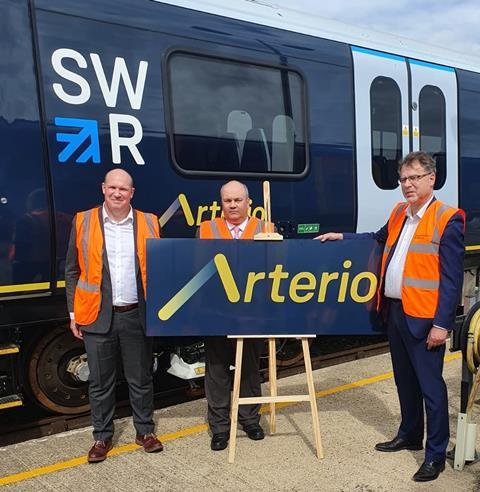 Speaking at Wimbledon depot on August 24, SWR Managing Director Mark Hopwood said the the name Arterio reflects the importance of suburban rail services to the capital and Waterloo’s status as the network’s busiest station, with railways being ‘the arteries which feed it, taking people to work and school, to theatres, restaurants and bars and home again’.

The first Arterio EMU is expected to enter service on the Waterloo – Reading route later this year, with a total of 750 vehicles to be introduced over the next two years.

The £895m contract for Bombardier’s Derby plant to supply the 60 10-car Class 701/0 EMUs and 30 five-car Class 701/5 units was announced by SWR’s parent companies FirstGroup and MTR Corp in June 2017. It is being financed by the Rock Rail South Western joint venture between Rock Rail, Aberdeen Standard Investments and GLIL Infrastructure.

‘The new fleet represents the largest single investment by pension funds and insurance companies into UK rolling stock, reflecting Rock Rail’s and our institutional partners’ commitment to sustainable travel and, working in partnership with SWR and Bombardier, to helping transform rail travel across the region’, said Mark Swindell, CEO of Rock Rail and director of Rock Rail South Western.