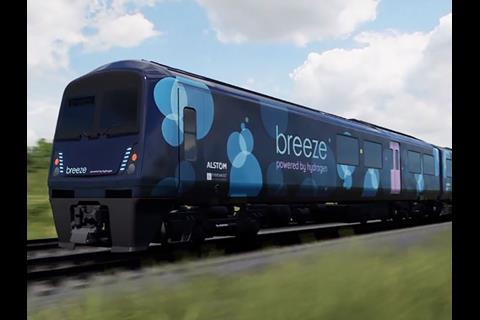 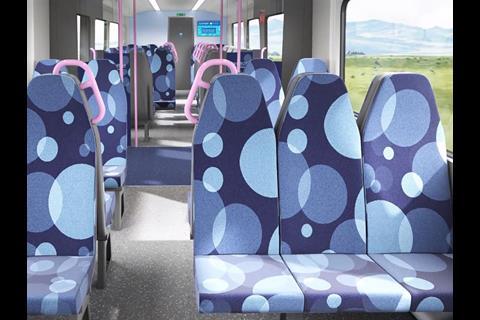 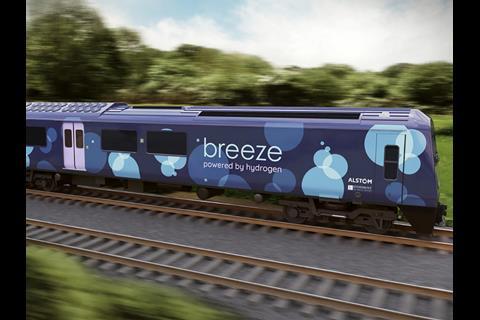 The 25 kV 50 Hz Class 321 EMUs which were built by BREL in 1998-90 are scheduled to be withdrawn by the end of this year. Greater Anglia is replacing them with new vehicles from Bombardier Transportation and Stadler. Alstom said the ‘proven and reliable’ EMUs were ‘an excellent fit in terms of characteristics, fleet size and availability for conversion to a hydrogen multiple-unit’.

A comprehensive engineering study has been completed and the design concept finalised. Alstom and Eversholt are now working with stakeholders to develop business cases and detailed plans for the introduction of hydrogen-powered units and the associated fuelling infrastructure. Conversion would be undertaken at Alstom’s Widnes site, and Breeze units could enter service from 2022.

They would have ‘a stylish, modern look’, said Alstom UK & Ireland Managing Director Nick Crossfield when the design was unveiled on January 7. ‘The railways need to decarbonise and the government has rightly set out a goal to eliminate diesel rolling stock by 2040. Hydrogen trains offer an ideal solution for routes which are unlikely to benefit from electrification, and our innovative engineering solution means they can now fit within the UK loading gauge and can quickly be ready to roll on Britain’s railways.’

Rail Minister Andrew Jones said hydrogen trains were ‘an exciting innovation which has the potential to transform our railway, making journeys cleaner and greener by cutting CO2 emissions even further’, and the government was ‘working with industry to establish how hydrogen trains can play an important part in the future, delivering better services on rural and inter-urban routes.’

At InnoTrans 2018 leasing company Porterbrook and the University of Birmingham signed a memorandum of understanding for an ex-Thameslink Class 319 EMU to be fitted with fuel cells, with Hydro Flex demonstration runs envisaged for mid-2019. Alstom’s first Coradia iLint hydrogen new-build hydrogen multiple-units entered passenger service in Germany in September 2018, while French national operator SNCF expects to run a fuel cell powered train in 2022.