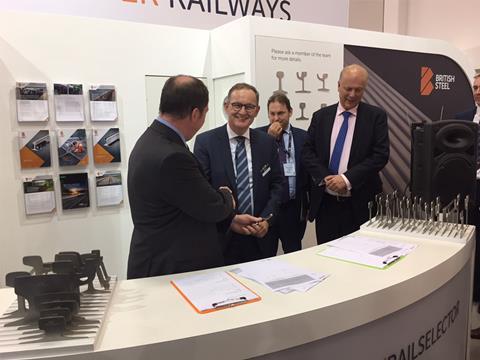 UK: A £200m contract for British Steel to supply approximately 200 000 tonnes of rail to Network Rail was formally signed at InnoTrans on September 19 in a ceremony attended by Secretary of State for Transport Chris Grayling.

The two-year extension to a five-year contract which began in 2014 covers the period from March 2019, and will see the delivery of around 4 000 km of rail, meeting around 95% of NR’s requirements. It covers the supply of long rails from Scunthorpe as well as specialist products including Zinoco coated rails for areas with high rates of corrosion. Most of the rails are to be used for routine renewals and maintenance, although NR says some may be required for expansion projects.

Rob Morton, Supply Chain Operations Director at NR’s Route Services business, said it was 'pleasing to see two British organisations trading for mutual benefit’, adding that ‘this new deal is an example of how we continually review our sourcing options to provide the safest network and maximise value for money for the British taxpayer.’

British Steel’s Chief Marketing Officer, Ron Deelen, said the company had been working ‘extremely closely with Network Rail, ensuring the on-time delivery of half a million tonnes of high-quality rails in lengths of up to 216 m.’