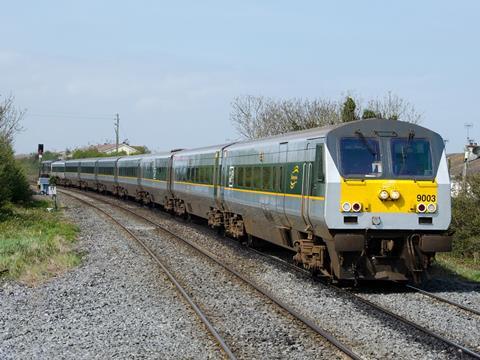 EUROPE: North-south rail services between Belfast and Dublin could be upgraded over the coming years, under a three-stage development strategy agreed by Irish national operator Iarnród Éireann and its Northern Irish counterpart Translink.

Launched in Belfast as part of Northern Ireland’s Bus+Train week initiative, the plan envisages investment in both rolling stock and infrastructure to reduce journey times for Enterprise services on the 183 km route from the current 2 h 10 min to ‘potentially 90 min or less’.

The first stage would see the acquisition of new trains to replace the De Dietrich push-pull trainsets which were introduced in 1997. This would allow the current eight trains/day in each direction to be stepped up to an hourly service.

IÉ and Translink have already applied to their respective governments for authority to start procurement of a new Enterprise fleet. They are now seeking funding for the acquisition, as well as a detailed technical and economic feasibility study for infrastructure enhancements which would reduce journey times below 2 h under the second phase. In the longer term, the two railways believe that electrification and the acquisition of new trains could pave the way for further frequency improvements as well as cutting journey times.

‘Developing the cross-border Enterprise rail service will be essential to strengthening economic links, and is key to increasing close communication between our two capital cities’, said Translink Chairman Frank Hewitt on June 8. ‘The plan aligns with both programmes for government to support the growth of public transport while also delivering social and environmental benefits by decongesting roads, reducing carbon emissions and promoting all-Ireland tourism.’

‘Our stakeholders have engaged with us as we have developed this strategy’, added IÉ Chairman Frank Allen. ‘We value their continued partnership as we seek to support each other in what our rail service achieves for our economy and society in the years ahead.’