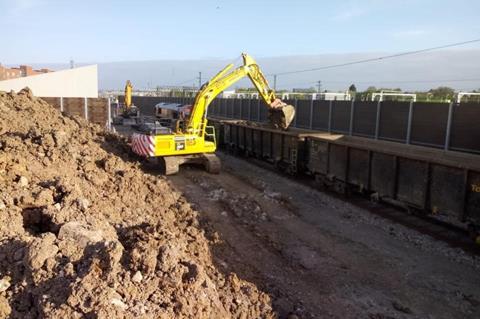 This is intended to facilitate the movement of aggregates and spoil for major infrastructure developments such as High Speed 2 and the regeneration of Brent Cross, with the operator saying each train was equivalent to 76 HGVs.

Tarmac and FCC Environment have already started operations at the site, with discussions ongoing between DB Cargo UK and a number of other potential operators for the two remaining vacant plots on the 151 ha site.

‘Our new rail freight terminal at Cricklewood will complement our existing operations at Bow East, Acton and Barking, providing a major boost for the capital’s construction supply chain’, said DB Cargo UK’s Head of Sales Roger Neary. ’The new facility has been sympathetically designed to minimise the impact on the neighbouring community and has a major role to play in helping the government meet its challenging target of net-zero greenhouse gas emissions by 2050.’