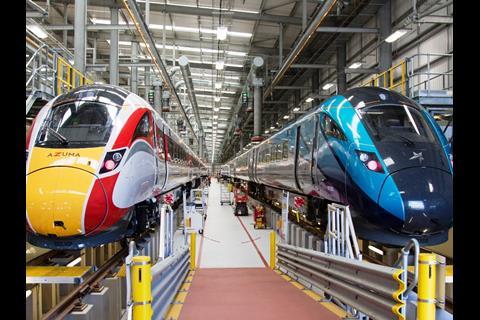 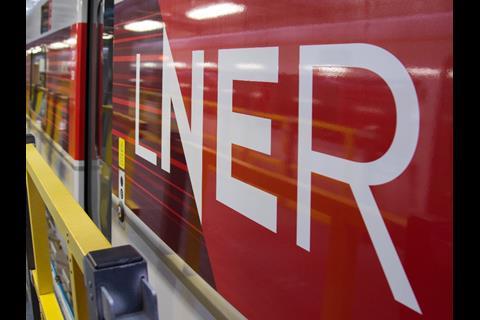 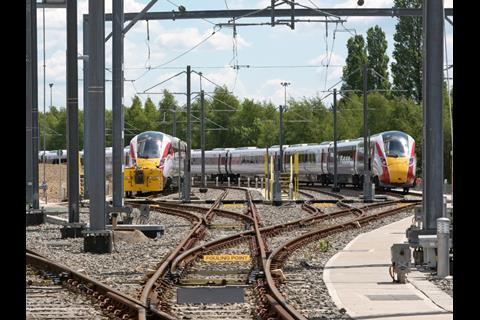 UK: Hitachi Rail Ltd is ramping up maintenance activity at Agility Trains East’s new Doncaster depot as the roll-out of Class 800/801 Azuma trainsets begins on the East Coast Main Line. The first Azuma entered service on May 15, and four more were being used for driver training in late May.

Agility Trains East is a special purpose company established to work in partnership with the Department for Transport in developing the Intercity Express Programme to provide a new fleet of electric and electro-diesel trainsets for the East Coast Main Line. A similar entity, Agility Trains West, has supported the roll-out of IEP trains for Great Western Railway. ATE’s shareholders are Hitachi Rail (70%) and John Laing Group (30%).

ATE leases the depot at Doncaster Carr from Network Rail, but it is operated by Hitachi. Located on the site of a locomotive depot which opened in 1876 and closed for redevelopment in 2014, Carr will serve as the principal maintenance hub for the Azuma fleet, which is being delivered to inter-city operator LNER under IEP.

ATE has a Master Availability & Reliability Agreement with DfT and a Train Availability & Reliability Agreement with LNER. This requires ATE to provide trains to support 54 diagrams under a ‘no train, no pay’ model; when complete, the Azuma fleet will consist of 65 trainsets consisting of 43 nine-car and 22 five-car formations.

Speaking at Doncaster Carr on May 21, Geoff Elliott, Hitachi’s General Manager for Rolling Stock Maintenance, East Coast, told Railway Gazette that ATE had invested £80m in the depot, leading to the creation of 250 jobs. The depot is expected to handle 12 ‘half-set equivalents’ each evening for servicing; a nine-car Azuma is considered two half-sets for berthing purposes. The 7 ha depot has 14 external stabling roads and 10 inside the workshop, plus two wheel lathes. It is equipped to undertake heavy overhauls of the Class 800 family, including replacement of major components such as bogies.

According to Hitachi’s Programme Director Andy Rogers, the facility is ‘primarily working on IEP’, with other trains being serviced only under agreement with ATE. The depot will be the home base for around half of the LNER Azumas, while the 30 nine-car Class 801 EMUs will be allocated to Bounds Green depot in north London. This legacy facility is currently home to LNER’s 31 ex-British Rail IC225 trainsets. Hitachi is now Depot Facility Owner at both Bounds Green and Craigentinny depot in Edinburgh, and Agility has modernised both depots ahead of the introduction of the new fleets.

Since the IEP contact was finalised in 2012, Hitachi has won several other orders for its AT300 family under conventional leasing arrangements. As a result, ATE has agreed to maintain at Doncaster a fleet of 19 five-car Class 802 trainsets for TransPennine Express, which hopes to introduce them on its Liverpool – Leeds – Edinburgh route from the end of this year. Bounds Green will maintain a similar fleet of five Class 802s for open access operator Hull Trains.

Hitachi has also secured access agreements to use depots elsewhere on the network to service Class 800/802s, including ScotRail at Inverness (for LNER), Siemens at York (for TPE) and Alstom at Liverpool Edge Hill (also for TPE).