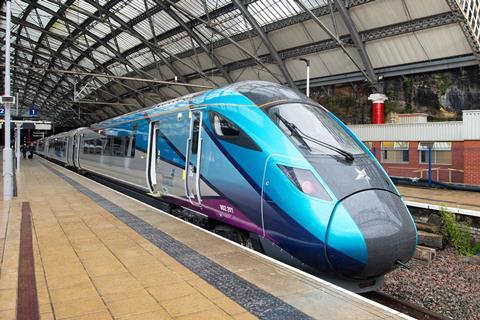 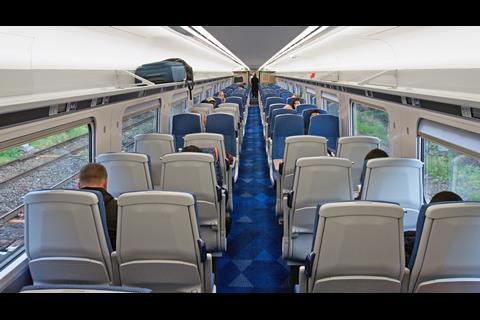 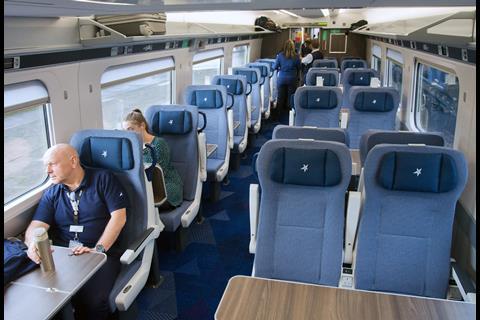 UK: The first of 19 Hitachi Class 802 bi-mode inter-city trains entered passenger service with TransPennine Express on September 28. Having received clearance late the previous evening, set 802201 operated the 06.03 from Newcastle to Liverpool Lime Street and 09.25 return as a one-off working ahead of regular service introduction later in October.

The electro-diesel trainset worked under 25 kV 50 Hz electric power both ways on the East Coast Main Line between Newcastle and York, and between Manchester Victoria and Liverpool, becoming the first TPE service to run in electric mode over the Chat Moss route through Newton-le-Willows.

It also became the first TPE service to operate at 200 km/h, achieving this southbound between Newcastle and York. Further testing and crew training will be completed before the remaining sets enter service.

Each five-car set, designated Nova 1 by TPE, provides 342 seats; 318 standard and 24 first class. This is 161 seats more than the three-car, 160 km/h Class 185 Siemens Desiro DMUs which have been used for the past decade on most of TPE’s regional express services running east-west across northern England.

The Nova 1 trainsets, which are based on the Class 800/801 design developed for the UK government’s Intercity Express Programme, have a real-time passenger information system in every car and storage for up to four bicycles. The trains have five toilets, including one which is TSI PRM compliant, plus wi-fi and onboard media servers. Plug and USB power sockets have been fitted at every pair of seats. Electronic seat reservation displays are colour coded to show occupancy for all or part of the journey.

The 19 trains were built by Hitachi at Kasado in Japan and Pistoia in Italy and financed by Angel Trains; they will be maintained by Hitachi at depots in Doncaster and Edinburgh.

The Nova 1 fleet will be used on TPE’s Manchester Airport – Newcastle and Liverpool Lime Street – Newcastle services, with the latter being extended to Edinburgh Waverley from December 2019.