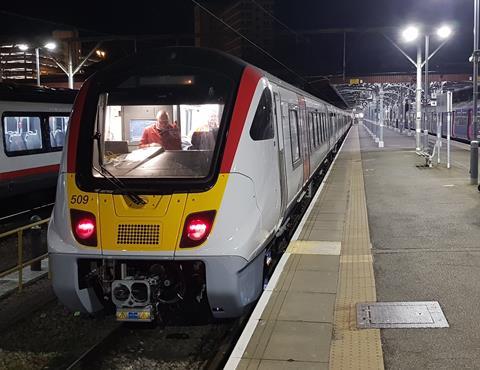 UK: Greater Anglia has begun testing the first of the 111 Aventra 25 kV 50 Hz electric multiple-units being supplied by Bombardier Transportation for its London commuter routes.

In the early hours of March 17, the EMU was tested on the Southend Victoria line in what the operator said was ‘another significant milestone in the progress towards getting the trains into passenger service’.

These tests included checking the interaction with the track and signals, testing performance at different speeds, and checking every station and platform to see if any signs or platform furniture will need to be relocated.

Drivers and station staff also need to be trained to work with the new trains.

The order covers five-car units with 544 seats and 10-car trains with 1 145 seats. Passenger features include plug and USB sockets, air-conditioning, under-floor heating and passenger information screens. The units are 40% lighter than previous trains, and equipped for regenerative braking.

‘We can’t wait to get these trains into service because they’re going to make such a positive difference to customers journeys, so it’s fantastic that this testing has begun’, said Ian McConnell, Greater Anglia’s Franchise & Programmes Director. ‘Once we are fully satisfied the trains are performing as we want them to, we will put them into passenger service which will be later this year.’

‘As well as providing extra seats, they will also give our customers a much more comfortable journey as these brand-new trains have all the mod cons that 21st century rail passengers now expect.’

More than 230 of the 665 cars have been completed. Two of the six production lines at Bombardier Transportation’s Derby plant are currently dedicated to assembly of the fleet, and the manufacturer said it had recruited 400 extra staff since December ‘to help reduce the delay to the project which has been caused by a range of factors’.