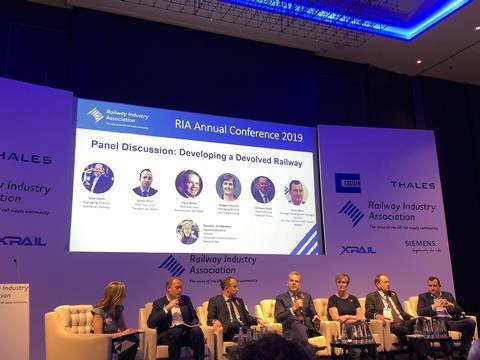 The RIA conference included a panel discussion on devolution of rail powers with the UK.

Simpson was part of a panel discussion exploring whether greater devolution of control over rail services to regional and sub-national bodies could lead to improvements for passengers and freight shippers.

From a freight perspective, Simpson was concerned about contrasting attitudes to RFG members’ operations in different parts of the country. She highlighted tweets from Network Rail Scotland encouraging modal shift of freight from road to rail, while elected mayor of Greater Manchester Andy Burnham had recently tweeted that freight trains should be removed from the congested Castlefield Corridor through central Manchester. ‘The mayor wants more powers over local rail, yet we might be starting with a fight before that process has even begun’, Simpson warned. 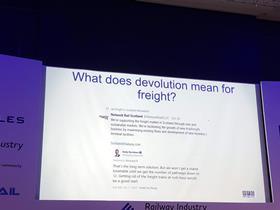 Barry White, Chief Executive of statutory body Transport for the North, responded by suggesting that ‘devolution cannot be branded “bad” just because we see something happening that we disagree with’. Instead, he felt that the rail industry needed to ‘focus on accountability’ to ensure passengers and shippers know who is responsible when things go wrong or who should be praised when they go well. ‘On the Transport for London network, the users know that the Mayor Sadiq Khan is ultimately responsible for the service. In many parts of the country that clarity does not exist.’

The panel also reflected contrasting approaches to rail devolution around the UK, with Scotland’s Railway Managing Director Alex Hynes pointing to the significant control that has been devolved to Holyrood. ‘From Monday, every pound spent on rail in Scotland will be locally controlled’, he suggested. This reflects the reform of Network Rail that now sees Hynes have responsibility for both operations and infrastructure in Scotland. ‘In future, there will be five flavours of NR, not five separate NRs. We think we can achieve more as a flotilla of ships rather than as one supertanker’, he added.

Hynes believed that this large-scale transfer of railway powers would enable NR’s Scottish Region and operator ScotRail to more rapidly achieve the sustainability targets set by the Scottish government. ‘There is a government commitment to decarbonise the railway by 2035, and we know that to achieve that we will need to do more electrification. So we look forward to working with the supply industry to deliver that.’

He urged the industry to make more of the ‘climate emergency’, suggesting that ‘we need to tell our passengers when they are travelling on an electric train’. Noting the rising consumer attention focused on climate change and related trends such as the adoption of reusable coffee cups, Hynes argued ‘there is money to be made’ from this messaging. ‘We in the rail industry have a vested interest in pushing the climate change message, because at the present time our railway network is simply not able to cope with the climate extremes we are now seeing.’

This brought a partial riposte from James Price, Chief Executive of Transport for Wales, who pointed to the rail sector’s responsibility to manage public funding with care. 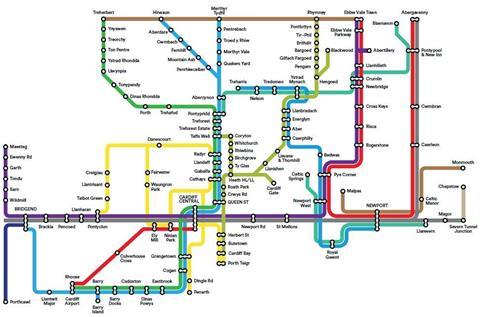 Suggesting that he was not sure if passengers really understood when they were using electric trains, Price felt the key to sustainability was modal shift. ‘The dirtiest diesel train that is completely full will always be more environmentally friendly than an empty electric train’, he asserted, suggesting that TfW would electrify routes ‘only where it made absolute sense’. Price added that TfW’s focus would be on multimodal integration, with the body intending to be ‘involved in the delivery of all modes of transport’ rather than being a hands-off specifying authority.

He warned the rail supply chain that it must do more to ‘deliver on the promises that it makes’ around enhancements. ‘We have to have more honest conversations about what is and is not realistic, to ensure that politicians do not lose faith in the sector. We all have more work to do on that front.’