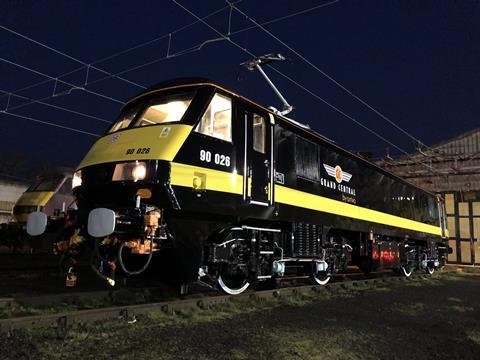 UK: The first of five Class 90 electric locomotives to receive open access passenger operator Grand Central’s branding has been unveiled ahead of the launch of London Euston – Blackpool North services this spring.

Four of the 175 km/h locomotives hired from DB Cargo UK will be in traffic at any one time, with one spare for maintenance at DB Cargo UK’s Crewe depot. 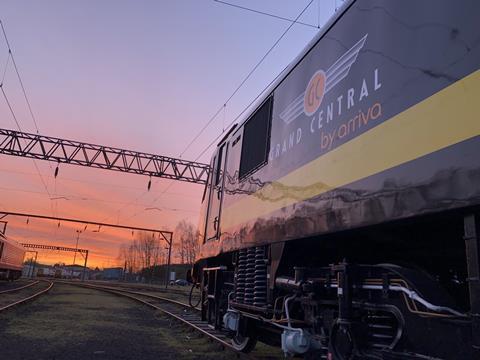 Arriva company Grand Central has also leased four six-car sets of MkIV coaches from Eversholt Rail until December 2026. Previously used on East Coast Main Line inter-city services, these are being refurbished at Alstom’s Widnes plant in a £1·5m programme which includes an interior refresh and the application of Grand Central livery. They will be maintained at Alstom’s Wembley site and serviced overnight in Blackpool.

Grand Central’s North West to London services were approved by the Office of Rail & Road in June 2018. It plans to operate up to five daily direct train services between Blackpool North and London Euston, calling at Poulton-le-Fylde and Kirkham & Wesham, Preston and Nuneaton, with most also stopping at Milton Keynes Central.

‘We are incredibly proud of the work that has been done to bring our new fleet of rolling stock to fruition, starting with our first locomotive ready to begin driver training in a couple of weeks’ time’, said Grand Central’s Fleet Project Manager Paul Batty on February 20. ‘It’s taken a lot of planning and a considerable team effort to get to this stage and it’s fantastic that our customers will soon be able to see our refurbished Grand Central trains in operation.’