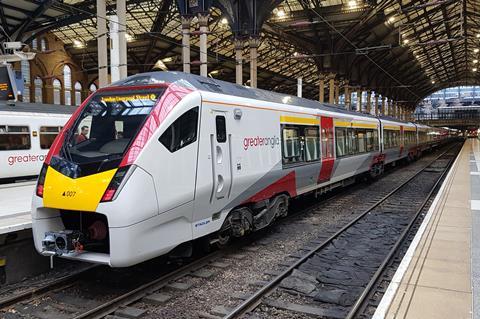 UK: The first of the Class 745/0 Flirt inter-city trainsets which Stadler is supplying for Greater Anglia’s Norwich – London Liverpool Street main line route entered service on January 8. All 10 are expected to be in traffic by mid-April.

Like the regional electro-diesel multiple-units and EMUs for Stansted Airport services which Stadler is supplying to Greater Anglia under the same order, the inter-city trainsets have accessibility features including a lower floor than older vehicles and a retractable step at every door to bridge the gap between the train and platform.

The £600m order for Stadler to supply a total of 378 Flirt multiple-unit cars for the East Anglia franchise was signed by Abellio UK and leasing company Rock Rail on October 4 2016. It is being financed by the Rock Rail East Anglia joint venture between Rock Rail, Aberdeen Standard Investments and GLIL Infrastructure.

‘We’re very pleased to have brought one of our new inter-city trains into passenger service’ said Ian McConnell, the operator’s Franchise & Programme director, when the inter-city set entered service. ‘Last month was difficult for our customers, as signalling issues on our rural branch lines caused a great deal of disruption and also set back our new trains roll-out. We are making every effort to improve our service – and the first longer inter-city train in service with all the facilities customers expected will start to make a difference’.