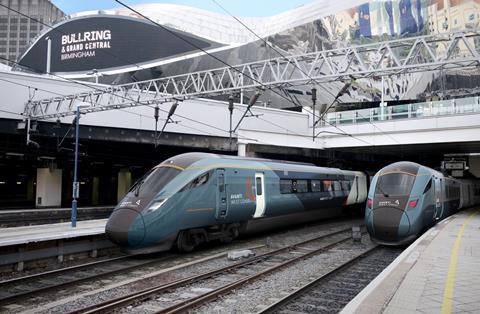 UK: First Trenitalia has awarded Hitachi Rail a contract to supply and maintain 23 inter-city trainsets for use on Avanti West Coast services. The contract announced on December 6 is worth £350m.

Due to enter service from 2022, the 200 km/h trains to be assembled at Hitachi’s Newton Aycliffe factory would come in two versions. Hitachi is to supply 10 seven-car electric trainsets with 453 seats to be used on services to the West Midlands and Liverpool, and 13 five-car bi-mode trains with 301 seats for services to north Wales. The latter would replace the existing fleet of Class 221 Voyager sets supplied by Bombardier.

The seven-car trains will have a similar numbers of seats to the nine-carriage Alstom Pendolino trains, as the cars would be longer, at 26 m. The 56 Pendolinos will be completely refurbished, giving them a similar internal feel to the new trains.

The fleet is to be maintained by a joint team from Hitachi and Alstom at the existing Oxley depot in Wolverhampton.

The First Trenitalia joint venture of FirstGroup and Italian national operator Trenitalia will take over InterCity West Coast services from Virgin Trains on December 8 under the Avanti West Coast brand.

‘We are delighted to provide more efficient and modern trains which are sustainable and environmentally friendly, reducing CO2 emissions by 61%, including new comfortable seats for an improved customer experience’, said Trenitalia UK Managing Director Ernesto Sicilia.