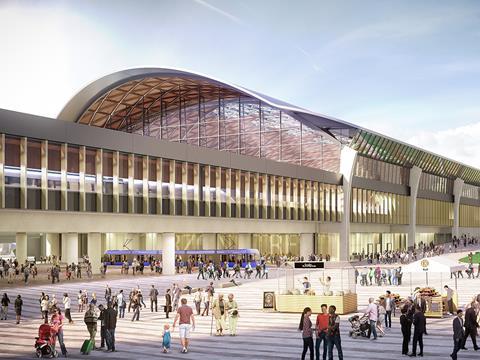 UK: The Chairman of High Speed 2 Ltd Allan Cook believes that ‘the benefits of the current scheme are substantially undervalued’, according to a ‘stocktake report’ presented to the House of Commons by Secretary of State for Transport Grant Shapps on September 3.

Updating Parliament on progress with the 540 route-km high speed line between London and northern England, Shapps explained that Cook had provided him with advice ‘on the cost and deliverability of the current scheme’. Cook’s assessment would also inform the government’s wider review of the project, being led by Douglas Oakervee, which is expected to report back later this year.

Insisting that ‘there is no future in obscuring the true costs of a large infrastructure project, as well as the potential benefits’, Shapps said that he was publishing Cook’s advice in the interests of transparency, adding that ‘we all in this House know that we must invest in modern infrastructure to ensure the future prosperity of our country’.

In his initial findings, Cook suggests that ‘the scale and the complexity of the task, as well as the transformational benefits it will deliver for the country and its regions were under-estimated in the original business case. The original plans did not take sufficient account of the compound effect of building a high-speed line through a more densely populated country with more difficult topography than elsewhere – and doing so whilst complying with higher environmental standards.’ However, Shapps pointed out that HS2 Ltd was continuing ‘to refine its estimates of cost, benefits and schedule’.

In terms of cost, Cook does not believe that the current scheme design can be delivered within the budget of £55·7bn, set in 2015 prices. He estimates that the total budget required, including contingencies, should be in the range of £72bn to £78bn. Adjusted by construction cost inflation this becomes £81bn to £88bn at 2019 prices.

Similarly, he believes that the current plan to complete Phase 1 between London and Birmingham by 2026 is not realistic. Instead, he has proposed ‘a range of dates for the start of service’. This could see trains running between Birmingham and Old Oak Common in west London from 2028, with the rebuilt station at London Euston following by 2031. Subject to the approval of the current Parliamentary bill, Cook believes that the short Phase 2a linking the West Midlands to Crewe ‘could be delivered to the same timescale as Phase 1’, at a cost of around £4bn. However, Phase 2b taking the high speed line to Manchester and Leeds would be delayed from 2033 to ‘between 2035 and 2040’.

Explaining that ‘I will discuss with the Chancellor the case for updating the costs and benefits of HS2 to current prices to ensure transparency’, Shapps said he had authorised HS2 Ltd to continue the current works that are taking place during ‘the short period’ until the independent review completes its work. ‘This will ensure we are ready to proceed without further delay for the main construction stage of Phase 1 in the event that the government chooses to continue’, he added. ‘Similarly, I intend to continue to progress the next stages of the Hybrid Bill for Phase 2a, West Midlands to Crewe, in the House of Lords while the review is ongoing’.

Describing the proposed delay as ‘very disappointing’, Sir John Peace, Chairman of the Midlands Connect group representing transport and business organisations across central England, insisted that ‘HS2 is the best way to add the extra rail capacity we so desperately need to rebalance our country’s economy. In the Midlands and the North, we are backing HS2 in full, stand ready to build it in full, and are impatient to start benefiting from it in full.’ He urged the government to ‘take a closer look at the benefits, which I don’t believe have been fully quantified or appreciated’, pointing to the significant environmental benefits and the regeneration already starting to take shape around the future station sites.

Acknowledging that ‘a major infrastructure project of this nature will have its timescales and costs updated periodically, and this has not happened on HS2 since 2015’, the High Speed Rail Industry Leaders group welcomed the updated information. Describing the project as ‘essential, and irreplaceable to the government’s goal of fixing the north-south divide which has beset Britain for generations’, HSRIL added that it was ‘encouraged by the Transport Secretary’s comments that the benefits of the scheme must not be obscured’.