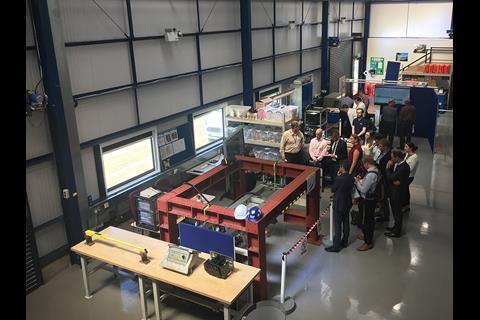 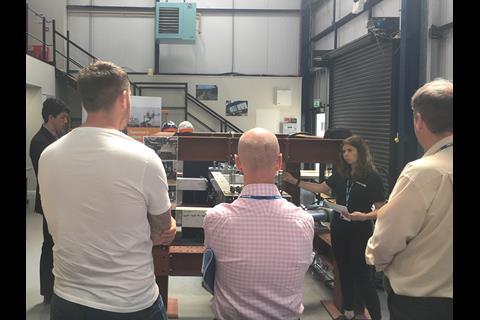 UK: ‘It is about developing the means to operate a railway in a more effective and safer way’, said Mark Bullock, Balfour Beatty CEO for Rail & Utilities, when he welcomed guests from the rail industry and academia to the company’s Rail Innovation Centre on June 28.

The 450 m2 facility at Balfour Beatty’s Raynesway site in Derby has been established to develop the company’s ‘predict & prevent’ infrastructure maintenance technologies. It undertakes R&D and testing to ‘fill the gap between academic research and practical applications’, according to Neil Andrew, General Manager, Engineering & Technology. ‘It’s about realising the vision of the people on the ground’, he said.

The Derby site works with the company’s York and Matlock offices, which collectively employ more than 150 specialists in systems engineering, computer science, robotics, data analytics, electronics and electrical & mechanical engineering. Balfour Beatty expects to initially employ four graduates, five apprentices and three trainees at the Derby site, and is working with universities to attract people from outside traditional railway disciplines, such as graduates with an understanding of the possibilities of machine learning.

‘Digital technologies are rapidly changing the rail industry, bringing new efficiencies and presenting new opportunities’, explained Bullock. ‘Rail is a fantastic industry, you can stay in it for life’, he felt, while expressing concern that the sector is ‘not good’ at promoting the careers on offer.

Boots off the ballast

A particular focus for the Derby site is on developing monitoring, surveying and data technology to reduce the need for people to be out on the railway. This reduces the need for disruptive possessions, and increases safety as staff can view assets from an office rather than out on the track. It can also reduce human error.

On test at the Rail Innovation Centre was one of the overhead line measuring units which will be installed on the roofs of three Bombardier Aventra EMUs for London’s Elizabeth Line. This will allow monitoring to be undertaken by trains in passenger service, removing the need for dedicated measuring trains which inevitably run less frequently.

A test rig at the centre simulates the harsh mechanical and electrical environment which will be experienced by 20 sets of bogie-mounted rail condition monitoring equipment which Balfour Beatty is supplying for installation on inter-city trainsets that Hitachi is building for Great Western Railway, LNER and TransPennine Express.

The OmniCapture camera for gathering data on infrastructure assets be permanently installed on a vehicle, or supplied in a case which can be mounted or removed in around 60 min. London Underground has used OmniCapture with nine Bombardier S-Stock metro trains, instead of using two dedicated monitoring trains, and during July the camera will be deployed on a Tyne & Wear Metro trainset for the first time.

Data from the cameras is processed using OmniSurveyor which produces a detailed 3D model of infrastructure assets as they are in reality. This is particularly useful for tasks such as signalling renewals, with Network Rail staff previously visiting each signal an average of five times when planning works.

Currently under development are sensors which will provide continuous condition monitoring at 25 level crossings on the East Coast Main Line. These are intended to provide early warning of developing problems which might otherwise go unnoticed until scheduled inspections.

A new tool is GaugeBuilder, which combines infrastructure, rolling stock and vehicle dynamics data to produce a model of actual rather than theoretical clearances. Users can see what the constraints are, allowing the cost of changes to be assessed – for example, it might turn out that relatively cheap modifications to a platform edge could be funded by an operator to permit the use of vehicles which might otherwise been deemed unsuitable. GaugeBuilder can also be used to improve passenger safety at the platform-train interface, calculating the best place for a train to stop on a curved platform to minimise the risk of falls.

Balfour Beatty is keen to support Network Rail’s vision of a ‘digital railway’. Andrew described this strategy as a ‘world class’, saying ‘we have been around the world, and met people who are in awe of what Network Rail is doing’.

A key part of evolving infrastructure and rolling stock maintenance strategies from ‘find & fix’ to ‘predict & prevent’ is making data from monitoring systems available in a way which facilitates decision-making. Balfour Beatty’s DataMap uses information about the current state of an asset to make predictions, allowing managers to see the financial impacts of repair, replacement or deferring work.

A real-time data visualisation platform has been developed for the Singapore metro which provides an overview of the network and highlights which assets need attention to support prioritisation.

‘Data on demand is becoming a reality, and this will only accelerate in the next five years’, said Andrew. ‘We now need to convert data to usable information.’

The growth of big data presents the challenge of ensuring that information is exploited to the full; the benefits of remote monitoring are reduced if it is seen as an addition to, rather than instead of, manual inspection.

There are also questions about how the benefits are shared. James Brown, Data & Performance Engineer at leasing company Angel Trains, told Railway Gazette that operators who were installing infrastructure monitoring equipment on their trains would expect to share any financial benefits of lower maintenance costs.

Brown said there could be benefits from developing an industry-wide agreement on open data. This could address concerns about the ownership of data when franchises end, and the risk of operators becoming locked in to a particular supplier’s data collection or processing systems.