Isle of Wight ‘transformation’ gets underway 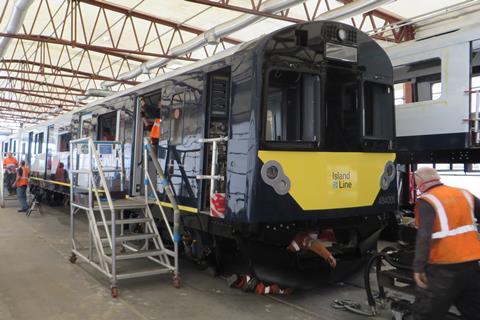 UK: South Western Railway has revealed the first of the Class 484 electric multiple-units which Vivarail is producing for the Island Line on the Isle of Wight, and has announced the dates of a major blockade of the 13·7 km line when engineering works are to be undertaken in advance of their introduction to service next year. 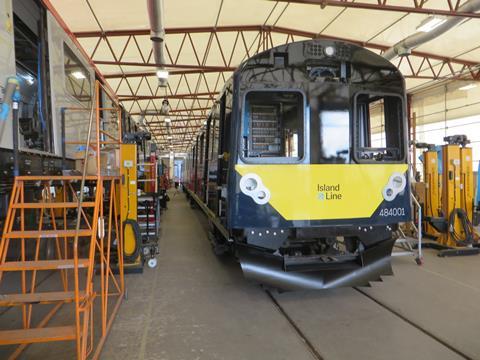 ‘The £26m investment in the Isle of Wight’s railway network is set to modernise the Island Line route, providing a more efficient, effective and reliable service for islanders and visitors alike’, SWR told Rail Business UK on August 20. ‘Our new fleet of Class 484 trains are a key part of this modernisation programme, offering passengers more capacity, better accessibility, USB charging, passenger information systems and onboard wi-fi.’ 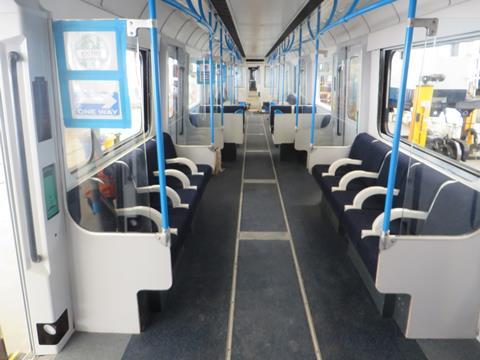 The five two-car Class 484 units are being produced at Vivarail’s Long Marston site using the bodyshells and bogies of metro cars which were previously used on London Underground’s District Line.

They will replace Island Line’s existing fleet of small profile ex-London Underground vehicles dating back to 1938, which are now the oldest trains on the national network and are to be made available to organisations able to give them a new home.

SWR is to lease the Class 484 units from Lombard North Central, which is part of the RBS Banking Group and has funded similar vehicles for West Midlands Trains. The first is expected to be delivered to the island for testing later this year.

Island Line services are to be suspended from January 4 to March 31 2021, to enable what SWR said would be ‘the biggest transformation to the line’s infrastructure since the line was electrified in 1967’. 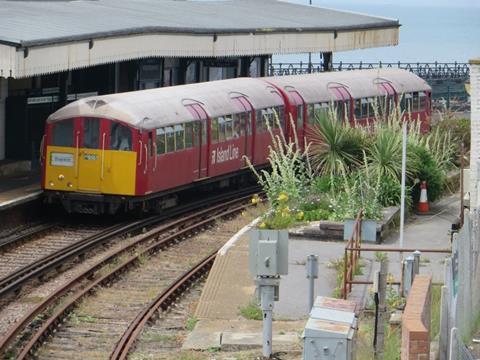 This will include the construction of a passing loop at Brading to permit the operation of a regular 30 min interval service instead of the current uneven 20/40 min headways, as well as track modernisation to improve ride quality, platform upgrades to improve access and the installation of new ticket vending machines at Shanklin, Sandown and Ryde St John’s Road.

Replacement buses will operate between Shanklin and Ryde Esplanade during this period, with a minibus running along Ryde Pier to connect with Wightlink ferries to the mainland.

‘This is a very exciting project for Island Line and will transform travel on the Isle of Wight’, said SWR Customer Experience Director Alan Penlington. ‘Whilst this work will be disruptive, we will keep our customers moving with replacement buses. Upon completion of this critical work, we will be introducing the Class 484 trains into service, providing modern spacious interiors, free on-board wi-fi, at seat charging points and dedicated wheelchair spaces.’