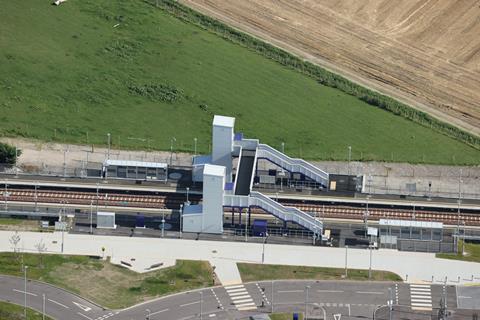 UK: A new station at Kintore, northwest of Aberdeen on the line to Inverness, was opened for revenue service on October 15, reinstating a rail service to the town 56 years after closure of the original station on different site.

Facilitated by re-doubling of the Aberdeen – Inverurie line as part of the A2I upgrading programme, the £15m project was funded by Transport Scotland, Aberdeenshire Council and Nestrans. Construction was undertaken by Network Rail and main contractor BAM Nuttall.

Located close to the A96 road on the outskirts of the town, the new station has two platforms, with step-free access via a footbridge with lifts, as well as cycle parking and 168 car parking spaces including 24 electric charging bays. Elements of the original 1854 station including benches and salvaged signs have been incorporated into the new facility.

Kintore will be served by up to 28 trains each day, with ScotRail providing a half-hourly service at peak times Monday to Saturday and an hourly service on Sundays.

‘Customers in Kintore can now benefit from a fast and frequent service to Aberdeen and Inverness, which will be transformational for the town and the surrounding area for years to come’, said ScotRail Operations Director David Simpson.

Nissar Mohammed, BAM Nuttall Operations Director Rail, said ‘alongside our work to dual the line between Aberdeen and Inverurie, this new station is the culmination of over five years work to make rail the transport option of choice for people living and working in northeast Scotland’.