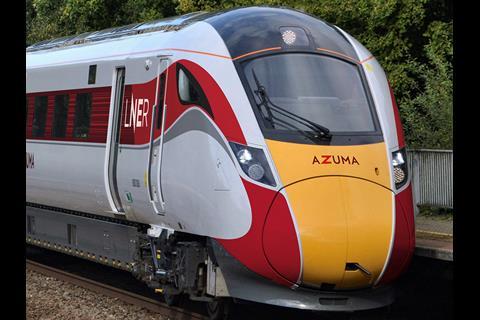 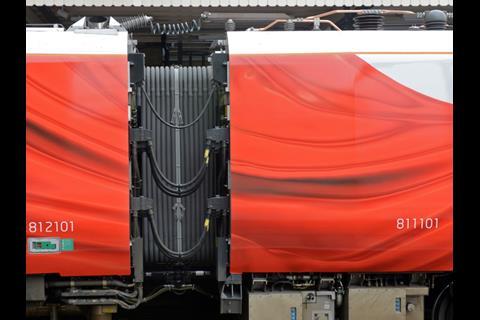 In a letter to manufacturer Hitachi Rail Europe, the Office of Road & Rail has authorised the operation of the Class 800/1 nine-car and Class 800/2 five-car electro-diesel trainsets to work in five, nine or 10-car formations at up to 200 km/h, but with some restrictions when sets are running in multiple with more than one pantograph raised.

ORR has raised caveats over the use of automatic selective door opening on the ECML, insisting that ASDO ‘must not be used until the infrastructure is available and operational rules developed’. Whilst ETCS onboard equipment is fitted to the trains, it may not be used except for limited functionality such as providing speed signals to the door system.

Concerns had been raised that people could put themselves in danger by climbing on the inter-vehicle jumper cables to reach the roof-mounted high voltage equipment or the 25 kV 50 Hz overhead electrification. ORR says the operator and manufacturer must ‘reach agreement’ on minimising the risks before either the bimode or electric trains are placed into service, pending the implementation of modifications. LNER is expected to brief its staff to be ‘extra vigilant’ on stations and during the dispatch process.

With work continuing to address potential EMC interference with signalling equipment on parts of the ECML, the initial clearance only applies to the route between London King’s Cross and Leeds. Network Rail is installing isolation transformers to the signalling between York and Edinburgh before this section can be cleared. In addition, reactors are being fitted to each transformer car, adding approximately 750 kg per vehicle.

According to an industry insider, Network Rail ‘has taken a risk-based approach to bringing the trains into service without the filters on the transformer cars’, on the understanding that they will be fitted by the end of 2019 or early next year. In the meantime if the interference issues damage signalling modules or track circuits, NR has reserved the right to impose restrictions on the trains or revoke the acceptance. Meanwhile, ORR has instructed Hitachi to ‘record harmonic footprints for each train prior to entry into service on the ECML’.

LNER is hoping to reach agreement with Hitachi to accept nine bimode sets into its fleet by the end of March and final testing of the automatic power change-over software is underway. With EMC testing still to be completed LNER is cautious about setting a date for passenger service, but hopes to make an announcement by mid-March. A senior insider said the operator wanted eight weeks ‘to get them loaded into the reservation system, but we certainly expect to have sets in traffic for the summer. We're delighted that the ORR has authorised the Azumas, subject to a number of key pieces of work that need to be completed’.