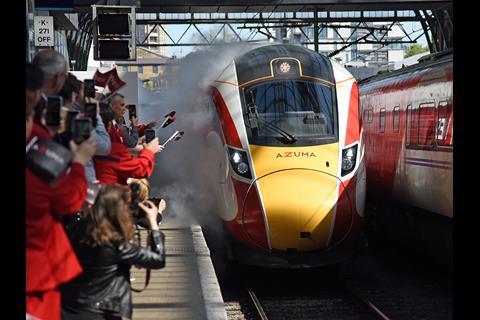 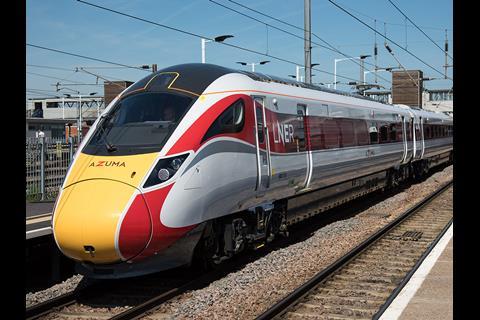 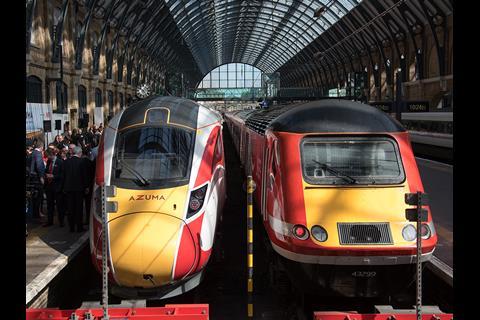 UK: ‘The launch of the Hitachi Azuma fleet is another step in the history of a route which has long been associated with iconic trains’, LNER Manging Director David Horne told guests on a preview train on May 14, the day before the new fleet is set to enter passenger service.

Hitachi is supplying LNER with 13 nine-car and 10 five-car Class 800 electro-diesel trainsets and 30 nine-car and 12 five-car 25 kV 50 Hz electric-only units. The fleet was ordered under a 27½ year train provision contract as part of the Department for Transport’s Intercity Express Programme, and similar trains are already in service with Great Western Railway.

By the end of June LNER intends to have six daily diagrams worked by the nine-car sets, with four and eventually five others involved in driver training from the first 13 trains to be accepted. So far 12 nine-car sets have been accepted into the LNER fleet and the first set to be constructed, having been equipped out for testing, will enter service once Hitachi has rebuilt it as a conventional unit.

The entire fleet of 65 trains will be delivered over the next year, allowing LNER to withdraw its ex-British Rail IC125 diesel and IC225 electric push-pull fleets. However, LNER expects to seek a derogation to retain six of the 200 km/h diesel trainsets for up to six months from the end of 2019, despite them not being PRM compliant, as planned remodelling work at London King’s Cross will require the use of other terminal stations in London which currently cannot handle the Azuma trains.

The first IC125 is due to be handed back to its leasing company on May 16, and the use of Class 90 locomotives, which have been hired from the freight sector to supplement LNER’s Class 91 fleet, is expected to end in mid-June.

The first five-car Class 801 EMUs should be delivered by the end of June, enabling type testing to be completed. LNER said one of the challenges for drivers would be the coupling of Azumas during diagrams, which will be a key feature of its enhanced service pattern. The Leeds – London route will be the first to be operated using Azumas, with the Hull – London service also due to switch very soon.

Once deliveries are complete, the operator’s fleet will have increased from 45 to 65 trains. According to LNER, the Azuma fleet will not only increase capacity but also improve reliability and resilience, especially at times of disruption, since even the Class 801 EMUs are fitted with a single diesel powerpack.

LNER will only pay the Hitachi-led Agility Trains consortium, which manages and maintains the fleet under the IEP contractual structure, for trains available for service; Agility faces penalties if it fails to deliver the contracted number each day. According to LNER, this marks a significant change from the current approach, which ‘means we pay for a Class 91' even if it has a fault which keeps it out of traffic.

Several infrastructure issues must still be tackled along the East Coast Main Line before the Azuma fleet can take over all LNER trains, including Anglo-Scottish routes. The operator reports that ‘good progress’ is being made in resolving signalling interference problems, but improvements to the overhead power supply between Bawtry near Doncaster and Edinburgh are still outstanding. This involves installing 27 traction substations, 520 km of cabling including feeder cables and telecoms wiring, and 132 kV electricity supply connections at two locations.