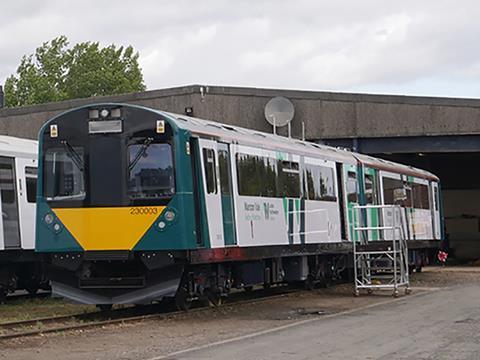 UK: The contract for the supply of three two-car Class 230 D-Train diesel-multiple-units for the Marston Vale line between Bedford and Bletchley has been formally signed, manufacturer Vivarail announced on August 22. Testing is expected to begin in the next few weeks, and entry into service is planned for December.

The units for the Bedford – Bletchley line will have accessible toilets, USB sockets and face-to-back seating. They will be supplied as DMUs, with automatic engine cut-out at stations and the capability of future conversion to battery power.

‘I remember these trains from when they were on London Underground, but looking around the units there’s so much new equipment on board that they look and feel like brand new trains’, said Jan Chaudry-van-de-Velde, Managing Director of operator West Midlands Trains. ‘Vivarail has done a great job and these trains are an ideal match for this important local service.’

‘Everyone is pleased with the look and build quality and I’m very proud of the work my team has done’, said Vivarail CEO Adrian Shooter. ‘I am particularly impressed with the London Northwestern Railway livery and their interior designs; they certainly showcase the Class 230 and I think will be well received by Marston Vale’s passengers.’

In a separate deal, incoming Wales & Borders franchisee KeolisAmey has ordered five three-car Class 230 diesel-battery multiple-units for use on the Wrexham – Bidston, Conwy Valley and Chester – Crewe routes from mid-2019.