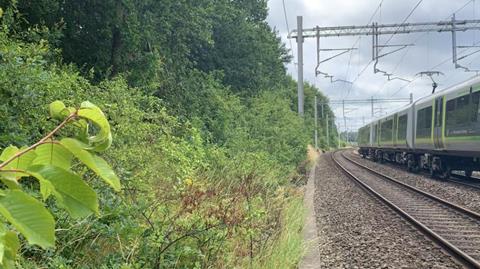 UK: Network Rail has published an Environmental Sustainability Strategy which it describes as its ‘most ambitious and forward-looking’ to date, and a key part of its ambition to position rail as ‘the cleanest, greenest form of mass transport’.

The strategy was being finalised as the impact of Covid-19 on the rail sector became more severe. Network Rail notes that ‘though the long-term effects of the pandemic are not yet known, the railway has a huge role to play in supporting the government’s ambitions to build back better.’

Network Rail aims to be ‘the first railway organisation in the world to have science-based targets for reducing carbon’, with plans to be released later this autumn. It will ‘support delivery of the legal 2050 net-zero greenhouse gas emissions target through an affordable and deliverable programme of decarbonisation’, working closely with the supply chain to reduce the rail sector’s overall emissions.

With the derailment near Stonehaven having highlighted the impact of severe weather on infrastructure, Network Rail confirmed that the environmental strategy includes ‘important commitments around how we will protect the railway from the effects of climate change, improve biodiversity on our land and minimise waste’.

The strategy focuses on four priorities: a low-emission railway; a reliable railway that is resilient to climate change; improved biodiversity of plants and wildlife; and minimising waste and the use of materials.

A clear commitment states that Network Rail ‘will achieve net zero carbon emissions by 2050 (and 2045 in Scotland) and deliver continual improvements to air quality so that our passengers, neighbours, and employees breathe healthier air.’

The Traction Decarbonisation Network Strategy recently published as an interim document is to be completed and approved by the end of this year, along with the approval of science-based targets for Scope 3 emissions (including traction diesel emissions).

Network Rail intends to be trialling bi-mode, hydrogen and battery trains by 2024, and to have reduced pollutants in its stations by 25% by 2030.

The target for the completion of the roll out of electric vehicle charging at its operated sites and managed stations is set at 2029, while the infrastructure manager is planning to transition its road vehicle fleet to ultra-low emissions by 2035. The target is for 100% of non-traction electricity to come from renewable sources by the end of 2020, and all energy by 2030. An air quality improvement plan for Network Rail managed stations and depots will be produced by 2024.

Network Rail will update asset policies and standards by 2024 to reflect long-term climate change projections. By 2027 it will agree with government and regulators the level of service to be provided in extreme weather conditions. Long-term strategies and an assessment of investment required for different scenarios will be developed by 2029, and the vulnerability of all assets to climate change will be reviewed by 2024.

By 2029 it intends to reuse, recycle, or redeploy all harmless infrastructure materials, having mapped and prioritised materials and waste streams within its supply chain by 2021. A ‘circular economy policy’ for reducing resources and waste will be ‘embedded’ by 2022, and material reuse and redistribution systems will form part of the procurement process by 2024.

Introducing the strategy, Network Rail Chief Executive Andrew Haines explained that ‘our railway is on a journey to a cleaner, greener future. Our starting point is strong. Rail is efficient and seen as environmentally sound by the public. The busiest parts of the system have long been electrified. Rail can move millions of people quickly and cleanly over short or long distances, in cities and in the countryside. Rail freight can move huge loads with a fraction of the impact of road transport. No other form of mass transit can do this.’

The strategy was welcomed by the Railway Industry Association, with Technical Director David Clarke saying suppliers ‘have the skills, innovative thinking and drive’ to support it.