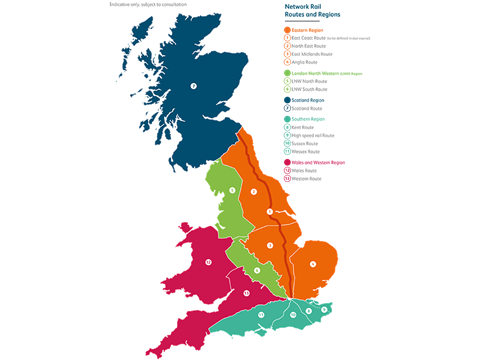 UK: Plans for a reorganisation designed to ‘put passengers and freight users first’ and address concerns about poor operating performance on the increasingly busy network were announced by infrastructure manager Network Rail on February 12.

‘The need for radical change is clear’, said Chief Executive Andrew Haines, reflecting on his first 100 days in office. ‘Performance is not good enough and my comprehensive discussions with partners, passengers and politicians up and down the country has made clear to me the things we do well and the areas where we need to improve. Devolution has to go much deeper to enable us to get much closer to our partners and customers’.

The number of geographical ‘Routes’ will be increased from eight to 13, aligned more closely with passenger train operating franchises in an effort to increase their responsiveness to operators’ needs.

The Routes will report to five new ‘Regions’, each headed by a managing director. These Regions will take over a range of head office responsibilities, and are intended to be large enough to support the operator-facing Routes while reducing bureaucracy.

NR’s network-wide Infrastructure Projects activities and elements of its System Operator, Safety Technical & Engineering and Group Digital Railway activities will be devolved to the regions and routes in phases by the end of 2020.

A new Network Services Directorate will be formed, incorporating the Freight and National Passenger Operators activities as well as elements of the Group Digital Railway and certain other national services. This directorate will provide assurance for national operational performance and co-ordinate national programmes and capabilities.

The existing Route Services Directorate will continue to provide business services such as payroll that benefit from economies of scale, and those involving resources that are scarce and/or managed more efficiently at a national level. The Finance, HR, Communications, Legal and Property units are largely unaffected at this stage in the process.

Chief Executive of the Railway Industry Association Darren Caplan welcomed the announcement, saying NR ‘needs to become more transparent, accessible and business-focused’, with a ‘culture of collaboration that ensures suppliers, from world-class multinationals through to our many innovative SMEs, are seen as partners with Network Rail, delivering value rather than as just the providers of products and services.’

However, General Secretary of the TSSA trade union Manuel Cortes described changes as a ‘white elephant’ catering to the ‘vested interests’ of train operators. Reiterating calls for the renationalisation of train operators, he said he was ‘concerned that devolution is nothing more than double-speak for further fragmentation and running down of our railways.’