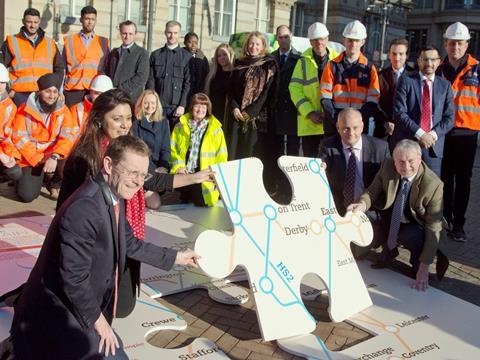 UK: Representatives of the High Speed Rail Industry Leaders group joined national and regional politicians in Birmingham on February 25 to unveil a giant jigsaw of Britain, writes Tony Miles. This was intended to highlight the regional connectivity benefits of High Speed 2, with the ‘missing piece’ in the jigsaw, representing the Midlands, being inserted to complete the map.

Among the dignitaries present were Mayor of the West Midlands Andy Street and Transport Minister Nus Ghani, whose portfolio includes high speed rail. Stressing the wider economic benefits of the £56bn programme, HSRIL reported that more than 2 000 businesses were now involved in the programme, which is expected to deliver £92bn in wider economic benefits and create 30 000 jobs, of which 70% would be outside London and the southeast.

From a transport perspective, policymakers are increasingly keen to stress how HS2 would integrate with the conventional network and with proposed enhancements including the Northern Powerhouse Rail route linking Liverpool with Leeds and northeast England.

Street welcomed the government’s ‘unstinting’ commitment to HS2, suggesting that the jigsaw reinforced how ‘the northern connections to the Midlands are really just as important as those going south. At the moment it’s easy to get to London, it’s much more difficult to get to the Northern cities.’

As has been the case with major rail projects elsewhere in the world, HS2 has faced a steady stream of criticism, particularly relating to costs. Ghani told Railway Gazette that she finds such negativity ‘disappointing’, as it overlooks the tangible progress being made in construction and the wider legacy of the scheme, especially in skills. ‘Politicians are often criticised for taking short-term decisions; this is a long term decision to make a considerable investment in infrastructure for future generations’, she argued.

She added that while much discussion of HS2 focuses on reducing journey time, much less attention is given to the capacity aspects of the project. ‘We’ve got a very congested railway. We are trying to work out how we can transfer some of that capacity, and that’s what HS2 is going to deliver.’ She placed particular emphasis on using released capacity on the existing rail network for intermodal freight, noting that ‘95% of everything we consume in Britain’ comes through ports.

Thanks to the ‘paving’ legislation passed in 2015, preparatory construction work is already underway around the site of the Curzon Street terminus in Birmingham as well as at London Euston. Noting that ‘diggers are in the ground now’, Street emphasised the need to ‘carry on telling the story’ of how HS2 would provide ‘a new rail spine for the country’ with Birmingham at the centre of the network. ‘This story is about transport but it’s also about economic regeneration, we’re already seeing businesses moving to the West Midlands on the back of this promise of HS2 coming; that’s more jobs and more skills’, he added.

The optimism expressed by politicians about the benefits of high speed rail should not mask the efforts underway behind the scenes to manage the cost, scope and delivery of the programme. A government spending review planned for the middle of year is likely to include a detailed review of the cost of HS2, updating the values issued in 2015.

Mark Thurston, Chief Executive of HS2 Ltd, told a group of MPs in London last November that a number of challenges remained for the project promoter and its contractors, particularly relating to poor ground conditions on the first phase linking London with the West Midlands, and the amount of tunnelling added during the Hybrid Bill process to secure parliamentary approval.

These issues were explored in more detail at an event organised by the Westminster Energy Environment & Transport Forum on February 14. Among the speakers was Dr Mark Raiss, Engineering Director for Civil Infrastructure, EMEA, at AECOM, who outlined how HS2 Ltd and its contractors had been conducting a series of ‘challenge workshops’ since November to better understand the cost base.

Raiss himself had been leading the bridges and structures workstream, and he conceded that ‘the cost numbers arising from the Early Contractor Involvement process did not look very good’. In particular, he felt that the ECI approach had led to contractors pricing in risk to their responses to tenders, reflecting a relative lack of detail from geotechnical data at that point in the procurement process. The cost workshops are ‘part of HS2 Ltd’s efforts to understand the implications of how they have contracted’, he explained.

Raiss reported that his review looked at 12 structure types, including overbridges, viaducts and tunnel portals. An early question posed to participants was to ask whether if an equivalent structure built on a high speed railway in continental Europe, ‘how would you approach it and what would it cost?’ He described the workshops as ‘collaborative not contractual’, because it was in everyone’s interests ‘to bring the costs down to ensure we do actually end up building a railway’.

One of the early findings of the workshop process was to establish that the designs proposed for HS2 structures ‘were not overly conservative’, but that there was scope for ‘incremental changes to bring down costs considerably’. Raiss cited the wide variety of design choices made for structures performing a similar role, and suggested that more design time could be allocated to smaller structures that are required to be built at many locations along the route.

Nick Bisson, Director for HS2 Phase 2b and Northern Powerhouse Rail at the Department for Transport, felt that the challenges facing HS2 were ‘the result of planning in a densely populated country’. He looked forward to preparation of ‘a final business case and notice to proceed’ for Phase 1 coming this summer, but advised regional policymakers to ‘learn the lessons’ from construction of the Channel Tunnel Rail Link in 1998-2007 to ensure that ‘places served by HS2 are ready to accept it’. He noted that provisions had recently been added to the parliamentary bill for Phase 2a between Handsacre and Crewe to support the potential development of a hub station where HS2 meets the West Coast Main Line.

Looking further ahead, Bisson suggested that DfT and Transport Scotland continued to ‘look at ways to drive down journey times’ between London, Birmingham and Scotland, initially focusing on enhancements to the WCML north of Preston. These would not require specific parliamentary legislation, he believed.

Responding to questions about the predicted usage of HS2, Bisson insisted that DfT’s modelling and forecasting methods were ‘conservative by international standards’. A frequent assertion from critics is that improvements to onboard connectivity mean that journey time savings are less valuable today than in the pre-digital era. However, Bisson countered that DfT had updated its value of time assumptions in 2014, and that were intended to reflect ‘the time savings that the business community is willing to pay for’.