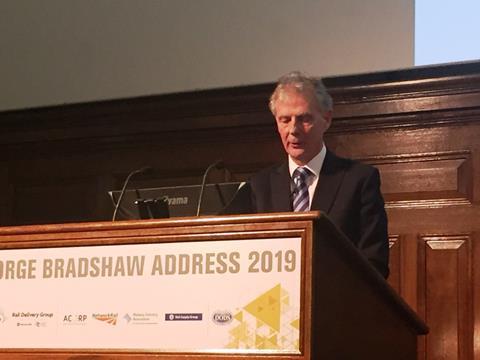 UK: The rail industry needs ‘to adapt to a fast changing world’, and ensure that it focuses on the needs of passenger and freight customers, according to former British Airways Chief Executive Keith Williams, who was last year commissioned by Secretary of State for Transport Chris Grayling to undertake a comprehensive review of the UK rail sector.

Presenting the annual George Bradshaw Address to senior rail industry executives in London on February 26, Williams offered ‘some preliminary thoughts’ on his review. Having spoken to a wide range of stakeholders and users across all parts of the country over the past five months, he had found ‘much passion and knowledge’, along with a ‘remarkable consistency in feedback’ about the need for reform. This included ‘a shared belief that we are at a critical juncture where public trust crosses the industry’s ability to deal with change’.

Noting that there had been 30 different reviews into aspects of the UK rail sector since 2006, he felt many of them had not resulted in significant progress. However, he said this time there was ‘a very clear commitment from the Transport Secretary’ to ‘bring in root and branch change’.

Williams accepted that many of the problems currently being experienced were the result of a massive increase in ridership and the number of trains being operated over the past 20 years on a network that has not changed fundamentally. Huge sums were being invested to improve the railway, yet the sector was unable to deliver effectively for its customers.

‘Nothing has convinced me yet that we have either a common vision or the capability across the industry to make the railway truly customer-centric’, he warned. In particular, he cited the fragmentation of responsibility, leading to ‘short-termism’, a ‘lack of accountability, flexibility and joined-up thinking’, and conflicting interests.

Williams saw his role as ‘to realign the different parts of this fragmented industry so that they face the same way, with shared incentives, and with risks and rewards sitting in the right place — always with a singular focus on the customer’. In terms of determining the future structure, he felt it was important to ‘look at what rail should do and the structure should follow’.

Franchising model 'not fit for purpose'

Williams believed that the current model of passenger rail franchising was ‘no longer fit for purpose’, and was ‘no longer delivering clear benefits for either taxpayers or farepayers. What worked 20 or 25 years ago no longer works today and will not work into the future.’ He felt that the industry was unable to ‘innovate at the pace at which customers expect’.

Another challenge was affordability, given that ‘passengers are no longer willing to pay more when their perception is that the service is getting worse’. The review team had just published the first in a series of position papers focusing on the costs and benefits of the rail network in Great Britain, highlighting the ‘vast amounts of money’ that the government had put into ‘maintaining and enhancing the railway’. Looking ahead, Williams emphasised that it would be necessary ‘to ensure that Britain’s railways are financially sustainable’.

In terms of structure, Williams said the current system ‘does not have the structure and accountability it needs to properly deliver’. Whilst agreeing with Network Rail CEO Andrew Haines’ view that ‘bringing track and train closer together’ would be necessary to restore performance, he suggested that ‘there is unlikely to be a “one size fits all” solution. The review would therefore continue to look at options including localised decision-making, integrated concessions and partnerships, ‘absolutely focused on customers’. However, he recognised that genuine accountability needed to be accompanied by ‘the authority to deliver’.

Williams expects to issue ‘five or six’ position papers by the end of March setting out his thoughts on various aspects of the rail sector and seeking further feedback. These would then ‘inform’ his final report to the Secretary of State. He anticipated that the government would issue a White Paper during the autumn, setting out its response to his proposals and the legislative changes required to achieve the desired outcomes.