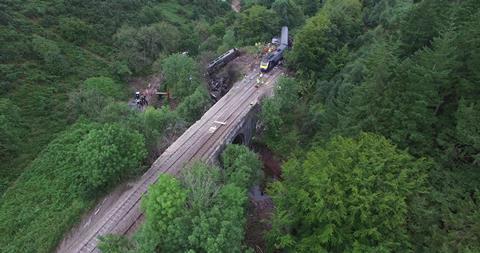 UK: The Rail Accident Investigation Branch issued a statement on August 14 setting out initial information about the derailment of a ScotRail passenger train near Carmont in Aberdeenshire two days earlier, which led to the death of the driver, conductor and a passenger.

The HST trainset operated by the Abellio-owned ScotRail franchisee comprised a leading power car, four MkIII coaches and a rear power car, and was carrying the driver, conductor and a second conductor travelling as a passenger, as well as six passengers. 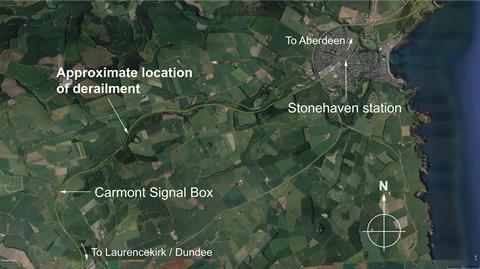 It had originally been operating as train reporting number 1T08, the 06.38 service from Aberdeen to Glasgow Queen Street which departed on time from Aberdeen and then Stonehaven, running on the double track main line. It continued past Carmont on the up (southbound) line until it was stopped by the signaller at Carmont using a radio message.

This was because the signaller had just received a report from the driver of a train on the down (northbound) line that a landslip was obstructing the up line between Carmont and Laurencekirk.

When it became apparent that 1T08 could not continue its journey south, the decision was taken to return it to Aberdeen, and it was routed back over a crossover at Carmont onto the down line. After travelling for approximately 2·25 km, at around 09.40 the train struck a landslip covering the down line about 6·4 km southwest of Stonehaven, and all six vehicles derailed

As the track curved to the right, the train continued in a roughly straight line for around 90 m until it struck a section of bridge parapet, which was destroyed. The leading power car continued over the bridge and then fell down a wooded embankment, as did the third coach. The first coach came to rest on its roof, having rotated to be at right angles to the track. The second coach also overturned onto its roof and came to rest on the first. The fourth coach remained upright and attached to the rear power car; it also came to rest on the first carriage. All wheelsets of the rear power car derailed, but it remained upright.

RAIB is collecting evidence to identify factors relevant to the cause of the accident and its consequences. It said the scope of its investigation is likely to include:

RAIB’s investigation is independent of a joint investigation instructed by the Lord Advocate to be carried out by British Transport Police, Police Scotland and the Office of Rail & Road.

‘It is the job of the RAIB, the UK’s independent rail accident investigation body, to identify the immediate and underlying causes of the accident, and to make safety recommendations to reduce the risk to the UK’s travelling public and rail employees alike’, said Simon French, RAIB Chief Inspector. ‘Thankfully, fatal derailments are a rare occurrence on the UK’s national network. However, landslips and other earthworks failures remain a risk to trains that needs to be constantly managed — and this is becoming even more challenging for the rail industry due to the increasing incidence of extreme weather events.’

The Rail Safety & Standards Board said this was the first train derailment causing the death of passengers or staff since one passenger died at Grayrigg in Cumbria in February 2007. The last time a train driver died while driving was at Ufton Nervet in 2004.

Following the derailment, the government has asked Network Rail to review its resilience to, and management of, extreme weather.

Speaking from the site of the derailment, on August 13 NR Chief Executive Andrew Haines outlined measures being taken:

‘Our climate is changing and it is increasingly challenging the performance and reliability of the railway, but incidents like yesterday’s devastating accident are incredibly rare, and our railway remains the safest major railway in Europe’, said Haines. ‘Our network was designed for a temperate climate, and it’s challenged when we get extremes such as storms and floods. We’re seeing this more and more and although we can address them on the ground with precautionary measures, we are acutely aware we need a long-term resolution, and we had already secured additional funding and resources to help achieve this.

‘Yesterday was a tragedy, a truly horrific event, and my thoughts remain with everyone affected. Understanding what happened is the key to making sure it never occurs again.’