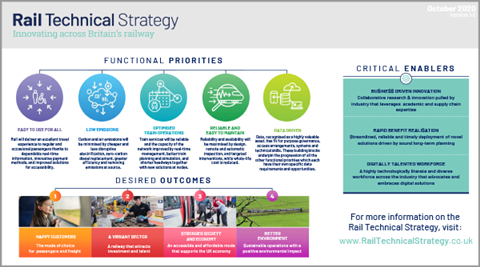 UK: A vision for the development and deployment of technology across the rail sector was unveiled on October 13 with the publication of the 2020 Rail Technical Strategy.

Succeeding an earlier version published in 2012, the strategy has been developed by a cross-industry Technical Leadership Group including RSSB, Network Rail and the UKRRIN research and innovation community. It draws on input from more than 130 organisations and cross-industry groups including the Rail Delivery Group and the Railway Industry Association.

The RTS centres on a vision of how the UK railway might look in 2025 and 2040, and a series of ‘stepping stones’ which will inform the research and development priorities for the next five years. It is built around five ‘functional priorities’ that its promoters believe will be key to the future of the rail mode:

Recognising that the RTS would ‘play an important role in shaping the future of our railway’, Rail Minister Chris Heaton-Harris said the five priorities would ‘sit at the core of investment by businesses and academia, to bring much-needed technology and innovation to the UK’s rail network.’

RSSB Programme Director Luisa Moisio explained that ‘the rail industry needed this RTS to break down our long-term rail industry goals and focus on areas for which we need both the stimulation of new ideas and the acceleration of their adoption. The fact that it has been produced as a result of strong industry collaboration stands as a testament to our hopes for its future success and ability to make a real impact.’

As well as setting priorities for the use of existing research funding, and establishing pathways for development through a series of Rail Industry Readiness Levels, the partners are keen to harness research beyond the transport sector which might be applicable to rail.

According to the promoters, the RTS is intended to set ‘a clear direction’ for the development and uptake of existing and new technologies to achieve a series of ‘desired outcomes’. It will help to inform future investment, giving infrastructure managers, vehicle owners, train operators and suppliers better visibility of the sector’s technical needs. It could also help to promote ‘the UK’s world-class rail expertise and its vibrant innovation community’ globally.

Accepting that ‘it is impossible to know exactly what the future looks like for any mode of transport’, RDG Chief Executive Paul Plummer said ‘we know that there is an opportunity to build a better, greener and more customer-focused railway fit for the digital age and ready for changing travel patterns’. Network Rail Chief Executive Andrew Haines added that ‘now, maybe more than ever with the dual challenge of climate change and Covid, there is a compelling case for innovation in Britain’s railways’.