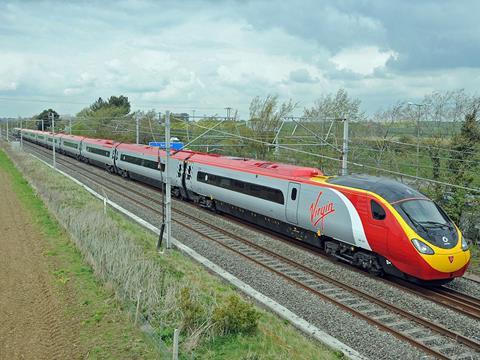 UK: Stagecoach Group has been disqualified from the Department for Transport’s three current passenger franchise competitions, the company announced on April 10.

Incumbent Stagecoach had been shortlisted for the East Midlands franchise, which the DfT announced on April 10 had been won by Abellio, and for the West Coast Partnership contract where it was bidding with its current West Coast partner Virgin Group and also SNCF; Virgin Trains said it was ‘very disappointed by the DfT’s unexpected decision’. Stagecoach had also been shortlisted for the South Eastern franchise where it was bidding with Alstom.

DfT said Stagecoach had proposed significant changes to the commercial terms for the three contracts, leading to bids which envisaged ‘a significantly different deal to the ones on offer’. It said Stagecoach was ‘an experienced bidder and fully aware of the rules’, and as such it was ‘regrettable’ that it had submitted non-compliant bids.

The issue centres on the allocation of financial risk associated with the industry-wide Railways Pensions Scheme. Stagecoach said franchise bidders had been asked to bear ‘full long-term funding risk’ on relevant sections of the RPS, ‘at a time when The Pensions Regulator is seeking additional funding because of serious doubts over the government's ongoing support for the industry-wide scheme.’ DfT said it wanted the TPR to be satisfied that train operator pension risks were managed appropriately, and it believed that train operators were best placed to manage much of this risk.

Stagecoach Chief Executive Martin Griffiths said the company was ‘extremely concerned at both the DfT's decision and its timing’, and it was ‘seeking an urgent meeting to discuss our significant concerns’. He said the bids had been consistent with guidance issued by the Rail Delivery Group which represents the industry, and warned that ‘without ongoing government support for the long-term funding of railway pensions, The Pensions Regulator has indicated that an additional £5bn to £6bn would be needed to plug the gap in train company pensions.’

RDG has been developing proposals to address TPR’s concerns, including a risk-sharing mechanism with the government designed to provide support against outlier events. RDG warned the Secretary of State for Transport earlier this month that there could be significant impact on franchises if an agreement is not reached soon, with TOCs expected to resist any requirement for increased contributions, an adverse financial effect on future franchise bids and a risk of legal disputes.

Griffiths said the ‘the rail industry proposed solution would have delivered an additional £500m to £600m into the scheme’, which ‘would have provided better stability and security for members and much better value for taxpayers’. He was ‘shocked that the government has rejected this for a higher risk approach’, and called for an independent value-for-money review.

‘Along with many other train companies, we believe strongly that the private sector should not be expected to accept material risks it cannot control and manage’, he said, ‘This was a key finding of the Brown review into rail franchising more than six years ago. We are therefore extremely surprised that the government still expects private operators to take risks they are not best placed to manage, despite the recent difficulties experienced by a number of operators of outsourced public sector contracts.’

Griffiths said the issue was ‘more evidence that the current franchising model is not fit for purpose’. It ‘damages the already fragile investor confidence in the UK rail market, and undermines the involvement of two of the last British transport groups who are part of running Britain’s railway’.

General Secretary of the RMT trade union Mick Cash said he had written to the Secretary of State to warn that ‘rail workers and their pensions will not be used as pawns in a row between your department and the train companies and we will take all necessary steps to protect our members’. Cash called for an ‘urgent industry wide summit to resolve this crisis and ensure the necessary protections are in place to protect rail workers and passengers.’