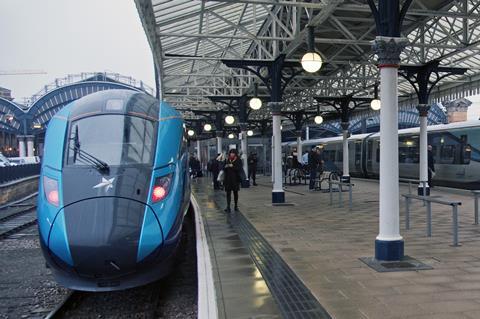 UK: The difficulty of persuading people back onto public transport and what this means for future service provision were the underlying themes of the most recent Transport for the North board meeting.

While continued growth in passenger numbers is reported in some areas of the country, with occasional services being full and standing, in many other areas local travel restrictions are having an adverse impact.

Rail North Partnership Director Gary Bogan told the TfN board meeting on October 21 that passenger numbers in the region have now fallen back to as low as 13% of normal levels, having reached ‘half demand’ when restrictions were eased. ‘We’re seeing peaks and troughs as different steps are taken’, he explained, adding that this was having a serious impact on the government’s call to “build back better”.’

TfN ‎Senior Commercial Manager Adam Timewell confirmed that demand has declined ‘as a direct result of the impact of recent local lockdowns and other Covid restrictions’, but indicated that planning was continuing for improvements including further service increases in December 2020 and May 2021.

Other sources have, however, told Rail Business UK that many of the industry’s more ambitious plans for May 2021, developed before Covid-19, are unlikely to be realised.

Timewell also confirmed that Covid-19 is putting pressure on industry resources as key staff including drivers and signallers catch the virus or are required to isolate. ‘The industry is developing contingency plans should they be needed.’

Noting that the reduction in train services had led to a marked improvement in performance, albeit followed a slight fall as further trains were added to the timetable, TfN members agreed that the likely permanent changes to passenger demand, particularly for commuting, provide the opportunity for a ‘stocktake’ of service provision.

‘Some of the assumptions made five years or more ago under the franchises are really no longer valid’, said TfN Strategic Rail Director David Hoggarth. ‘So what we want to do is have the best articulation around what northern England now needs to rebuild that confidence.’

This was taken up by Chair of Merseytravel Cllr Liam Robinson, who said post-Covid timetables should ‘be based on what the service the north actually needs’, but expressed concern that this could form part of a cost-cutting exercise.

This was taken up by TfN Chief Executive Barry White, who suggested that encouraging passengers back to rail would be vital in supporting the finances of the industry. ‘Beyond rebuilding confidence with existing passengers who have used railways regularly in the past, how do we attract new users to the railway at the right time, the middle of next year or even beyond?’, he asked, saying railway finances would be ‘significantly challenged’ without new users.

Board members questioned the current requirement for TOCs to operate so many services when, in the words of one member ‘it is quite clear to everybody that we’re delivering fresh air all over the country’ which is ‘costing ourselves an awful lot of time and an awful lot of money’. The question was posed ‘is there not just some common sense that should be applied here?’

Perhaps reflecting the political stance of many of TfN’s members, a proposal was made to challenge the DfT decision to pay franchised operators up to 1·5% as a management fee for continuing to operate trains during the Covid-19 pandemic.

Led by Robinson, a proposal was made to write to the Secretary of State to challenge this decision. ‘I have no issue with the public purse stepping in to cover the costs of operation, and the associated revenue risks’, he said. ‘But let’s be very blunt that that 1·5% management fee effectively is a profit margin, albeit a modest one. And, at this moment in time, it is unacceptable for any company or organisation to be making a profit from the taxpayer at a time of global emergency, particularly when many businesses and individuals across the north of England are not getting the level of support that they need to stay in business and to stay in work.’

He advocated advising the government that ERMAs for TOCs in the north be reviewed, ‘removing that management fee so that money can be put to better use for those people that need it’.

With support from other members, he concluded ‘if DfT is not willing to do that, then I think our next step would actually be to pursue the operating groups to ask them to work with us to use that money for the people in the north, those that really need it the most’.