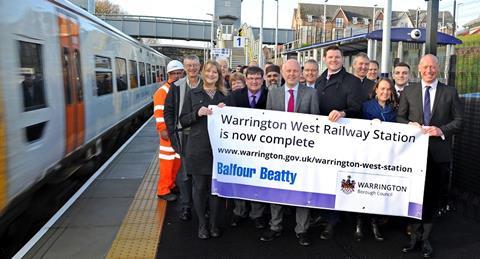 UK: Warrington West station opened with the December 15 timetable change. It is managed by Northern, which operates two trains an hour to Warrington Central and Manchester and two in the opposite direction to Liverpool.

Construction was undertaken by Balfour Beatty and Network Rail.

The station is designed to provide easy access for cyclists and pedestrians, cycle parking, space for car drop-offs, a large car park and a good interchange with bus services. The building is inspired by the design of aircraft hangars.

The new station ‘is an important part of our ongoing work to invest in our transport infrastructure, increase sustainable travel choices, reduce the need to travel by car and make sure our borough is a well-connected, business-friendly place’, said Warrington Borough Council’s Cabinet Member for Transportation, Highways & Public Realm, Cllr Hans Mundry. ‘Residents and commuters are now benefiting from a first-class, modern and accessible station, providing excellent links with Liverpool, Manchester, Warrington town centre and Birchwood, as a key employment area.’

As a result of the opening of the new station, services at the nearby Sankey For Penketh station have been reduced to four trains per day.