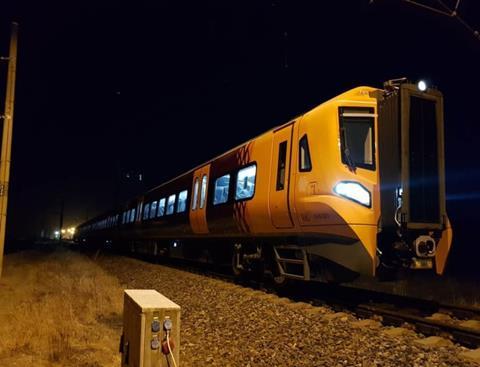 UK: West Midlands Trains has revealed the first of its CAF Civity Class 196 diesel multiple-units, which is now on test at the Velim circuit in the Czech Republic.

The 12 two-car and 14 four-car DMUs were ordered in October 2017 at cost of around €200m, with financing led by Infracapital and Deutsche Asset Management.

Deliveries are expected to begin in spring. The initial vehicles are being produced in Spain, with later vehicles to come from CAF’s factory at Newport in South Wales.

The DMUs are expected to enter passenger service from the second half of 2020, and will be used to increase capacity on the franchisee’s West Midlands Railway branded services between Hereford and Birmingham

‘It is exciting to see that this investment is starting to come to fruition with our new Class 196 trains entering the track testing stage before they begin arriving in the UK next year’, said Jane Fisher, WMR Transition & Projects Director, on December 18. ‘These smart, modern trains will boost capacity on our network and come with features such as under-floor heating and extra luggage space which I am certain will prove popular with passengers.’