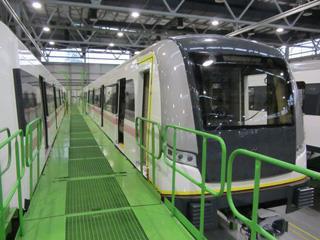 CHINA: Phase 1 of Wuhan’s 27·7 km metro Line 2 opened at 10.00 on December 28, with the dispatch of the first revenue-earning metro trains to cross the Yangtse River.

Line 2 runs on a broadly north-south alignment from Jinyintan in the northern Hankou district to Optics Valley Square in the southwestern part of Wuchang district on the southern side of the Yangtse. It serves 21 stations, including Hankou Railway Station, and Xunlimen, where interchange is provided with Line 1.

After Jianghan Road on the northern bank, the line tunnels under the Yangtse to reach Jiyuqiao, Zhongnan Road and Baotong Temple. There will be cross-platform interchange with Line 4 at Zhongnan Road and Hongshan Square when this route opens later in 2013.

Construction of Line 2 began in August 2006 at a cost of 20bn yuan. The line runs entirely underground, including the 1·7 km cross-river tunnel. Designed for a maximum speed of 80 km/h, the line offers a commercial average of approximately 35 km/h.

The line is currently operated by a fleet of six-car Type B trainsets from CSR Zhuzhou, which have two driving trailers and four intermediate motor cars, but the stations have been designed for eight-car sets.

As well as lines 3 and 4 which are scheduled to open in 2013, Wuhan is currently building a 6 km southern extension of Line 2 which will add four more stations. Work on Phase 2 began at the end of 2011 and is due for completion during 2013. Construction of a third phase adding 4·5 km and three stations at the northern end is expected to begin in 2013 for opening in 2015.