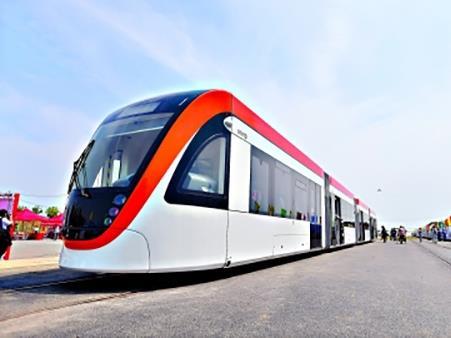 CHINA: Passenger-carrying tests have started on tram line T6 in Wuhan. The 16·8 km route with 23 stops is the city’s first tram line, and runs from Guanlianhu Road to Chelun Square.

The project cost was 2·6bn yuan. A 3 km extension is planned, which would add six stops.

CRRC Zhuzhou has supplied a fleet of 21 trams, the first of which was delivered to Wuhan at the end of May. The 100% low-floor five-section vehicles are 36 m long and 2 650 mm wide with capacity for capacity for 400 passengers including 60 seated.

The trams are equipped with supercapacitor energy storage. The supercapacitors are recharged at stops, which takes 10 to 30 sec. A tram can run for 4 km on one charge. Maximum speed 70 km/h. Siemens has supplied traction and braking equipment.