Accelerating the decarbonisation of rail

Pressure to decarbonise rail transport has driven interest in hydrogen fuel cells and battery technology as an alternative to diesel traction. Both will find a growing role in the rail sector, but wider factors including emissions from power generation will also influence deployment choices. 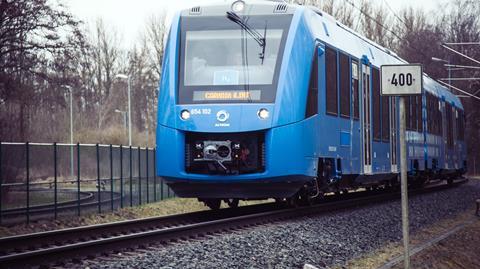 Fuel cell pioneer. Alstom’s iLint prototype multiple-units have been operating on the Elbe-Weser Bahn in northern Germany since September 2018, with several production builds now on order.

With sustainability and the climate emergency high on the political agenda, it is little surprise that concerns have been growing over the carbon footprint of transport, and the role that rail can play in reducing greenhouse gas emissions.

Of course, ‘quick wins’ come through modal shift of both freight and passengers from road or air to rail. But within the rail mode there is more that can be done, and pressure has been growing to reduce or eliminate the use of diesel traction, which still accounts for around 20% of all rail traffic in Europe and more elsewhere.

As well as conventional electrification using overhead catenary or third rail, two alternatives have emerged which are attracting significant interest: hydrogen fuel cells and battery trains. Hybrid electro-diesel and diesel-battery trains have also been ordered in various countries, but these were not included in our research as they do not result in complete decarbonisation.

Both fuel cell and battery technologies have made significant progress in recent years. Test trains have been running for some time, and the first commercial applications are starting to appear.

Two Alstom iLint fuel cell multiple-units have been operating in revenue service in Niedersachsen since September 2018, and they are due to be joined by another dozen over the next few years. Several other German Land transport authorities have expressed interest in fuel cells, and in May, Rhein-Main agency RMV ordered 27 multiple-units from Alstom for delivery by December 2022.

A prototype fuel cell trainset is currently on test at Japan’s Railway Technical Research Institute, and East Japan Railway has started work on a new generation of vehicles with the intention of having the first train ready for commercial use in 2024. In South Korea, Hyundai Rotem and Hyundai Motor’s Mabuchi Research Institute have started developing a fuel cell tram, following several similar projects in China.

Several railways in Japan and Europe have put battery-electric trains into service on regional lines, particularly where part of the route is already electrified. JR East has been operating two-car BEMUs in northern Japan since 2017, on a route that is one-third electrified.

In the UK, six out of the 52 EMUs that Stadler is to deliver to Merseyrail will be equipped with a 5 tonne battery to test the business case for onboard energy storage. The Land of Schleswig-Holstein, where only 30% of total route-km is electrified, has ordered 55 Stadler Flirt Akku battery-powered multiple-units to operate regional services. These are intended to have a range of 150 km on battery, and will be recharged from short lengths of catenary at stations, as well as on the electrified sections of the network. Meanwhile, DB Regio Alb-Bodensee is testing the BEMU version of Bombardier’s Talent 3 and a Siemens Desiro ML Cityjet with roof-mounted batteries has just been approved to carry passengers in Austria.

Strengths of each technology

Amid this maelstrom of innovation, it is important to step back and consider the relative strengths of each option, in order to ensure that the different technologies are deployed appropriately.

However, there are commercial constraints on electrifying lines with a relatively low traffic density, where the investments in fixed equipment would not be recovered. A study by Technische Universität Dresden suggested that a minimum frequency of 30 min between trains would be a good threshold. This could be reduced to hourly under positive circumstances, for instance if the route was already partly electrified, or where electrification would be very straightforward. 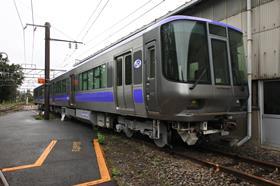 Although many European countries are planning to increase the electrified proportion of their rail networks in the next decade, complete electrification is therefore unlikely to be a realistic option.

Earlier this year, Roland Berger undertook a study for the Shift2Rail and Fuel Cells & Hydrogen joint undertakings, in order to determine where fuel cells might have advantages over battery propulsion in terms of performance and cost, and vice versa. Working with RWTH Aachen, we have now done some additional research on particle emissions and the use of raw materials which has helped to improve our understanding from the decarbonisation perspective.

Table I. Relative benefits of alternatives to diesel teaction

In order to compare the environmental effects of the various traction options, it is first necessary to determine the total energy requirement. However, this initially depends on the deployment profile of the train.

As an example, we can consider the case of an occupied train with a mass of 67 tonnes, operating over a flat route of 135 km with 10 stops, providing a two-hourly service on six days per week and four-hourly on one day.

Under these conditions, the train would have a usable energy requirement of 1 557 MJ per trip (Fig 1). Energy is needed to accelerate the train away from each station and to overcome friction and drag during the journey. In the case of an electric, fuel cell or battery train, the energy used during acceleration can be partially recovered during braking, reducing the net energy requirement to 1 160 MJ. This represents a considerable saving in primary energy consumption and the associated CO2 and other pollutant emissions.

Comparison of energy requirements for fuel cells and batteries (per trip).

When considering the energy input for fuel cell trains, the efficiency of the fuel cell must be taken into account. It is also important to consider how the hydrogen is produced — for example the low efficiency of generating hydrogen by electrolysis increases the overall demand for energy.

In the model-based determination of CO2 emissions from a diesel engine, the primary energy input can be calculated from the required usable energy on the basis of the efficiencies of the engine and the power transmission. The required fuel mass is then calculated from this based on the calorific energy of the fuel, which in turn can be used to determine the CO2 emissions during combustion. For the sample route, CO2 emissions for diesel traction would amount to 321 kg per journey, corresponding to 1 959 tonnes per year.

The type of hydrogen generation is a key factor for fuel cell trains. Assuming an electrolysis efficiency of 65%, it would be appropriate to use this method for producing hydrogen if the CO2 emissions related to the electricity used in production do not exceed 200 g/kWh. An alternative option is steam reforming, using a multi-stage chemical reaction to break down steam into a hydrocarbon, usually methane, pure hydrogen and CO2. Steam reforming creates approximately 11 kg of CO2 per kg of hydrogen produced, a figure which is largely independent of the energy input.

Fig 2 summarises the results of the calculations. This shows how the balance of CO2 emissions between the alternative traction technologies changes as a function as the average emissions from power generation increase. For obvious reasons, the emissions from diesel propulsion remain constant. The differences between the pure electric and fuel cell options are particularly evident in the case of ‘green’ electricity production. With the fuel cell train, the emissions rate levels off where the CO2 emissions from power generation exceed 200 g/kWh, as the assumption is that hydrogen would then be produced by steam reforming.

Comparison of CO2 emissions at low emissions in electricity generation.

Fig 3 zooms in to the lower end of the graph, showing how the difference between battery and overhead line propulsion decreases as the CO2 emissions for electricity production increase. The significant jump in emissions for the fuel cell train is due to the efficiency losses mentioned above.

Of course, carbon dioxide is not the only greenhouse gas, and the emission of other pollutants such as nitrogen oxides or particles is an issue with diesel traction. The emissions rate is heavily dependent on the exhaust technology used for engine combustion or electricity production, and in this respect, alternative drive systems have clear advantages over diesel traction.

Conversely, for battery and hydrogen propulsion, it is also necessary to take account of the raw material input for battery production. In the present example, 910 kg of pure lithium would be required to produce the batteries for a BEMU whereas the smaller batteries used on a fuel cell trainset would only require 19 kg.

Given the relative benefits and disadvantages of conventional electrification, fuel-cells and batteries, it seems clear that there will be a role for all three traction options in the future.

Fuel cells have potential applications on routes where service frequencies are too low to justify fixed electrification and a longer range is required that would demand large and heavy batteries. However, fuel cells have the disadvantage of requiring two energy conversions with their efficiency losses compared to just one for batteries. 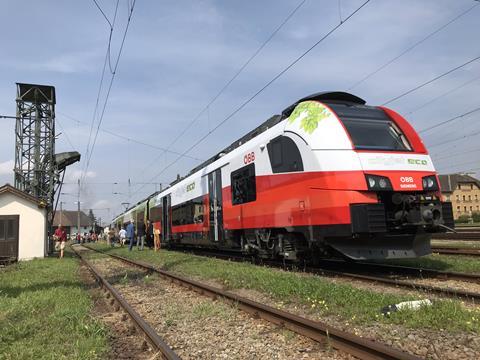 Battery power has advantages over fuel cells in terms of CO2 emissions, even when the emissions from the production of the batteries is taken into consideration. But the weight of the batteries will continue to limit the range of the vehicles. Battery power is suited to shunting locomotives which usually have idle times during the day that allow for recharging, as well as hybrid multiple units or locomotives equipped with pantographs that can operate on electrified lines and recharge from catenary or fixed charging points on unelectrified lines.

Given the long lifespan of rolling stock, diesel vehicles will remain a significant factor in the installed base for many years yet, especially in those countries with little political focus on environmental protection. Regulations to incentivise the replacement of diesel vehicles before the end of their economically optimal service life could also make an effective contribution to accelerating the decarbonisation of rail.

2. Shift2Rail JU and Fuel Cells and Hydrogen JU, Study on the use of fuel cells and hydrogen in the railway environment, 18.05.2019