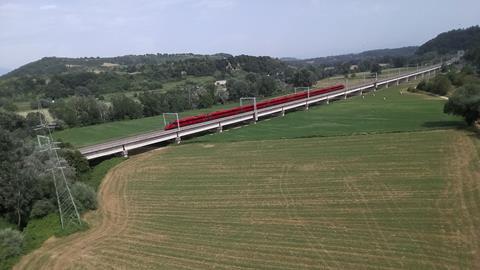 These are important lessons to be learned from the remarkable business turnaround achieved by Italy’s high speed open access operator Italo-NTV in the last five years.

Italy was the first country in the world to open its high speed rail market to competition in 2012. After more than seven years it is instructive to analyse the fortunes of the main protagonist in this revolution, Italo-NTV.

After its launch in 2006 the privately owned open access company, then known simply as Nuovo Trasporto Viaggiatori, suffered hard times as it struggled to obtain safety licences and technical approval for its new fleet of trains and to assert itself in the market. Traffic was slow to build, which meant that earning a return on investment represented a huge challenge for the company’s management team.

The picture began to change in early 2015 thanks to a strategic turnround engineered by then CEO Flavio Cattaneo, now Executive Vice-President. The good work has continued under Cattaneo’s successor, Gianbattista La Rocca, and the company is now seen as a very positive business. In 2018 it adopted the Italo brand used on its train fleet as part of the company name, becoming Italo-NTV.

Fig 1. Italo-NTV’s financial performance is clearly demonstrated by the improvements in Ebitda margin in 2014-18.

Fig 2. Italo-NTV’s current shareholders; Allianz has bought 11·5% of the shares during the last 12 months.

Investment in a bigger fleet

Even when the business outlook was difficult and complicated in 2014-15, management decided to invest in new rolling stock, taking the fleet size from 25 trainsets to 42 and from next year to 47. The original 25 trains were a version of Alstom’s AGV design, but the newer trains, known as Evo, are a non-tilting version of the same company’s Pendolino family. The larger fleet was essential to allow Italo-NTV to serve more towns and cities and run more services.

Towns off the high speed network are served by a network of feeder buses branded as Italo Bus. By integrating its rail services with road travel to tap markets with smaller demand, Italo-NTV has been able to expand the catchment area for high speed rail — which cannot reach every market.

Italo is now a very profitable company, achieving an Ebitda margin of 35% (Fig 1) as traffic continues its spectacular growth trajectory. This is one reason why Global Infrastructure Partners decided to buy the company in 2018. Looking ahead, GIP also saw the possibility of expanding the business at the European level.

GIP currently has 72∙6% of the shares, while in the past year Allianz has bought 11∙5% of the company. A small group of original investors has reinvested in the company; they include company President Luca Cordero di Montezemolo, who founded the business with former CEO Giuseppe Sciarrone, Flavio Cattaneo and other important figures who together own a 7∙7% holding. IP Infra Investors and Molagers have around 8% (Fig 2).

Efficiency is the key

The concept of efficiency in Europe’s railway business has really changed since the arrival of Italo-NTV in the market. Among the decisive factors are better use of assets, especially more productive use of rolling stock, and innovation in the relationship between the company and the customer to achieve a personal or even one-to-one relationship. Wider use of revenue management and the ability to reduce operating costs thanks to innovation are other elements.

In 2018 around 17∙5 million passengers chose to ride Italo trains on the expanded network, and this year the company expects to carry more than 20 million customers (Fig 3).

This figure is very high in comparison with the airline industry; national flag carrier Alitalia carries a similar number of customers in total, both domestic and international. The number of Italo passengers has nearly tripled in just five years with a higher load factor despite the expanded fleet. 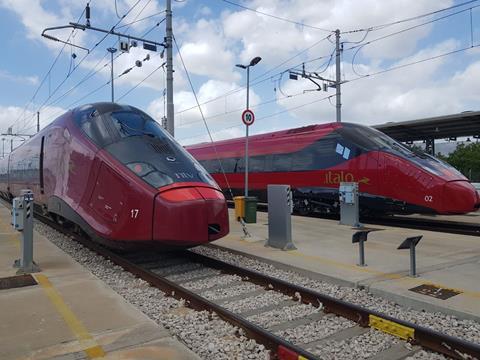 Italo-NTV expects to take delivery of five more Pendolino Evo trainsets (right) in 2020, helping it to compete with Trenitalia.

Thanks to good revenue management, Italo-NTV is attaining very high load factors. This is no mean achievement as, in contrast to the airline industry, it is difficult to maintain seat occupancy with trains that make relatively frequent stops. It’s  only non-stop services — those that are comparable with flights — are between Milano and Roma.

If we extend our view of competition to include the air market, it is clear that in Italy high speed rail has been able to win the battle on several routes, but especially in the most important market between Milano and Roma.

In comparing costs between Italo-NTV and the airlines, the railway company has now achieved a lower cost per available seat-km than many low-cost airlines such as Vueling or full-service carriers like Air France-KLM, British Airways, Lufthansa or Alitalia. This has an important if invisible impact as it is our environment that benefits.

Sustainable transport is a major target both for Italy and for Europe, and switching travel from air to high speed rail has a positive impact on the environment. NTV-Italo releases a sustainability report every year, and this shows how it has been possible to increase the volume of travel at the same time as reducing environmental impact.

Since the start of competition between Trenitalia and Italo-NTV in 2012, demand for high speed rail travel in Italy has doubled, but the impact on the environment has fallen as many passengers have switched from air to rail. This is attributable to efficiency improvements by the operators and a fall in the price of rail tickets.

This is one important reason why high speed rail travel in Italy has continued to grow even while the economy has been in recession — gross domestic product in 2018 was lower than in 2011, the year before the high speed rail market was liberalised (Fig 4).

Italo-NTV’s growth has had a positive effect in the job market. In the first six months of 2019, the company recruited 200 staff, while in August it decided to launch a recruitment drive for another 300 employees.

Fig 3. Italo-NTV is on course to carry 20 million passengers in 2019, tripling its traffic in six years.

Fig 4. By attracting high levels of traffic, Italy’s high speed operators have been able to operate with a low yield, despite a less than buoyant national economy.

Successful liberalisation of the high speed rail market in Italy suggests that similar success may await entrepreneurs in other European markets. The European Union’s Fourth Railway Package opens up big opportunities for efficient operators to develop their business, but it is clear that awareness of the liberalisation rules in any particular country is very important — precise definition is needed because the devil is always in the detail of the regulations.

Successful competition in the rail business does not just depend on a general law to open up the market. It also needs operators to be fully aware of many regulatory matters. These include use of paths on the main line and in stations, the ability of infrastructure managers to increase productivity, and the stability of access charges. In addition, there must be a strong independent regulatory authority overseeing the transport market.

It is not easy to enter the market as an open access operator and become fully established — in Italy the process was very long-winded and complicated, and even now the situation is not perfect.

In many EU countries, the challenge is probably very difficult, but experience in Italy offers some valuable lessons. The main beneficiaries of liberalisation have been the travellers, who now enjoy a competitive and efficient mode of transport at an affordable price, but there are also positive effects on the environment and in the wider economy. And there has been another positive side effect: competition has spurred innovation and competitiveness at the incumbent operator.

Many European governments now face a big dilemma. Do they continue to defend their national incumbents from a short-term perspective or do they venture to open up the market to genuine competition with potential benefits for many stakeholders?

The European rail market offers the opportunity to change for the better, with operators perhaps becoming the most efficient companies in the world’s high speed rail business.