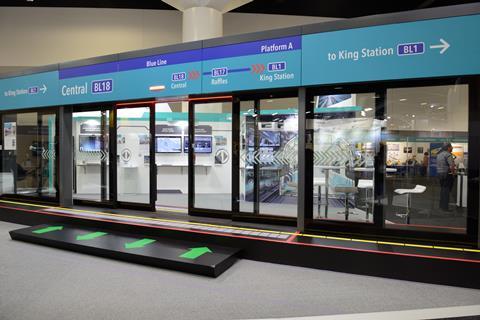 The VP-PSD detects the door configuration as each train approaches the platform, automatically moving the doors to the correct stopping position. This makes the PSDs suitable for use at stations served by a mixed fleet, where the train doors are not always in the same position on a platform. A ‘finger gap sensor’ prevents passengers from getting trapped between the doors.

As well as Sydney, Chow suggested other targets could include the New York Subway and London Underground. However, a challenge for retrofitting doors lies in ensuring the platform edge has been reinforced sufficiently to carry the extra weight. There can also be challenges where lineside cables have been laid directly below the platform edge.

Nevertheless, Chow highlighted the company’s successful retrofitting of PSDs on metros in Bangkok and Taipei. ST Engineering is also rolling out condition-based maintenance technology with data-driven predictive maintenance on its PSDs in Singapore, he added.