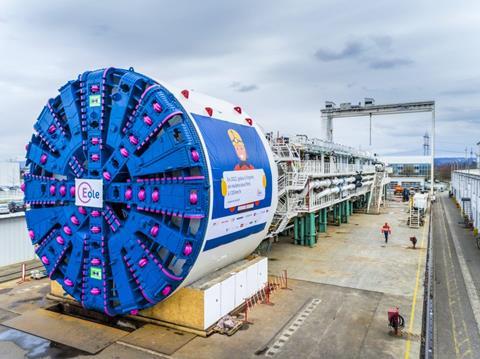 FRANCE: Construction of the main tunnel of the RER Line E extension between Courbevoie and Haussmann-Saint Lazare to the west of Paris will commence during the first quarter of 2019. This follows a traditional ceremony held at Courbevoie on November 28 to name the tunnel boring machine Virginie. Present at the event were Transport Minister Elisabeth Borne, President of the Île-de-France Region Valérie Pécresse and President & Director-General of SNCF Réseau Patrick Jeantet.

With a diameter of 11 m and a weight of 1 800 tonnes, Virginie is France’s largest TBM. Built in Germany by Herrenknecht, it will work at depths of 30 m to 40 m, progressing at an average rate of 15 m a day.

The 55 km western extension of Line E will open in phases, commencing with the section from Haussmann-Saint Lazare to Nanterre-la-Folie in 2022, with Mantes-la-Jolie reached in 2024. The line will run in tunnel as far as La Défense. From there existing tracks will be realigned and upgraded to accommodate the additional services. New stations will be built at Porte Maillot, La Défense and Nanterre-La Folie.

Speaking at the naming event, Valérie Pécresse said that the extension will relieve congestion on RER Line A, with 15% of traffic switching to the new route; Line A currently handles around 1∙2 million passengers a day.

A Declaration of Public Utility for the Line E western extension was granted in January 2013 and construction work was launched in February 2016 by the then Prime Minister Manuel Valls.