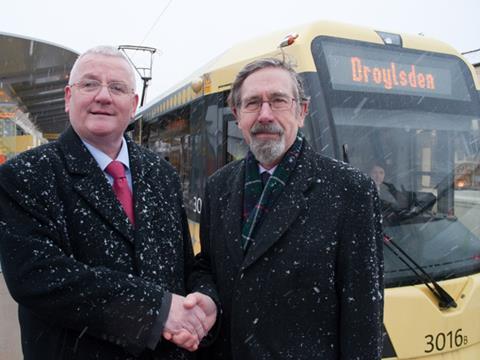 UK: Revenue-earning tram services began over a 6·3 km extension of Manchester's growing light rail network on February 11. Running east from the main line station at Piccadilly in the city centre to Droylsden, the extension serves seven intermediate stops, of which two are close to the Etihad Stadium, home of Manchester City football club.

While existing Metrolink routes make extensive use of former railway formations, the East Manchester Line includes a significant section of shared running with road traffic. Work is well in hand to extend the line by a further 3·9 km to Ashton-under-Lyne, with services expected to begin in 2014.

More immediately, trams have started test running along the former suburban railway between Shaw & Crompton and Rochdale northwest of the city; opening of this section will conclude the four-year conversion of the Oldham Loop to light rail standards.

Transport for Greater Manchester expects to complete its £1·4bn Metrolink expansion by the end of 2016. Projects still to do include construction of a new 14·4 km alignment from Chorlton-cum-Hardy to Manchester Airport and completion of on-street spurs to serve Oldham and Rochdale town centres. TfGM is also in the process of securing planning approval to build a second tram line through the city centre to relieve the congested delta junction at Piccadilly Gardens.

The Future Metrolink programme is being undertaken by TfGM's Project Delivery Partner Parsons Brinckerhoff, with construction and maintenance contracted to the M-Pact Thales consortium of Volker Rail, Laing O'Rourke and Thales UK.