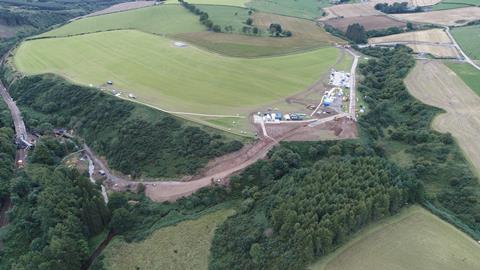 UK: Network Rail’s interim report into improving the resilience of its earthworks to extreme weather was published by the government on September 10.

The report was commissioned by Secretary of State for Transport Grant Shapps following the fatal derailment of a ScotRail train at Carmont near Stonehaven in Aberdeenshire on August 12. It is to be followed by a final report which will provide greater detail.

Two independent task forces were also launched to help NR better manage its cuttings and embankments, and its response to severe weather.

According to the interim report, at around 09.38 the train rounded a curve and struck a pile of stone which had been washed onto the track by water flowing from higher land.

Site investigations in collaboration with the police and the Rail Accident Investigation Branch are underway to gain an understanding of the interaction of any pre-existing field drains with the NR-owned drains which were installed in 2010 and last inspected in May 2020 with no defects recorded. These investigations include the use of ground penetrating radar, LiDAR and trenches to understand how the storm water came to wash out the stone.

NR has identified 584 other locations which share some characteristics of the Carmont site. Inspections completed on August 28 did not identify any significant issues requiring emergency intervention; at around 1% of the sites defects were found which require action sooner than planned.

The interim report calls for an increased focus on deploying technology to predict failures. NR is reviewing the speed of deployment of off-the-shelf geotechnical monitoring technology, and trialling monitoring systems including surface tilt meters to warn of sudden movements, aerial laser surveys by helicopter and drones, train-borne surveys and asset monitoring using telemetry.

It is also working with meteorological specialists to harness real-time, more granular data, and with operators to gain their insights into extreme weather.

NR is working with other agencies facing similar issues, such as Highways England, the Civil Aviation Authority, Transport for London and infrastructure bodies in Scotland, and is reviewing international benchmarks and practices

It will also work with RSSB on research into derailment containment measures, particularly as it considers rolling stock design opportunities and additional targeted track improvements.

Following the derailment, a cross-industry group chaired by RSSB reviewed communication processes during extreme rainfall, identifying the need to strengthen rules providing instructions on train operation in the event of reports of water build-up or damage to structures.

‘We owe it to those who lost their lives, were injured, and were affected by this incident to learn and act on every possible lesson to ensure this is never repeated’, said Shapps.

‘We will use the findings of this interim report to improve, shape and accelerate our work to build a more robust and resilient rail network so that our railway continues to be one of the safest in the world.’

General Secretary of the TSSA union, Manuel Cortes, said ‘it is crystal clear that climate change is leading to more extreme weather events which brings huge challenges to transport infrastructure. Our industry has already recognised this and the need to increase the resilience of our railways in the face of it. The Transport Secretary must now give cast iron guarantees that the investment needed to secure our railways will be made available.’

Network Rail Chief Executive Andrew Haines said ‘we are all aware that we are increasingly seeing more incidents of severe weather and, as the report published today shows, earthworks and drainage infrastructure – some of which are more than 150 years old – prove to be a real challenge as the country experiences more heavy rainfall and flooding.

‘Our railway is one of the safest in Europe and tragic accidents are incredibly rare, but something went wrong on August 12 and it is a stark reminder that we must never take safety for granted.’