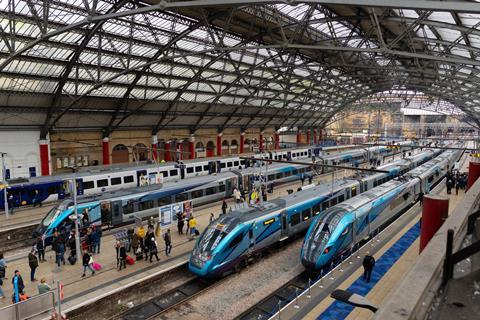 UK: Marking the completion of a £500m investment programme, TransPennine Express formally launched its new fleet of 44 Nova trainsets with an event at Liverpool Lime Street station on November 22.

Working with different leasing companies and manufacturers, the FirstGroup-operated franchise has procured three builds of new trains to operate on inter-city corridors in the north of England, increasing capacity by more than 80% across its network. 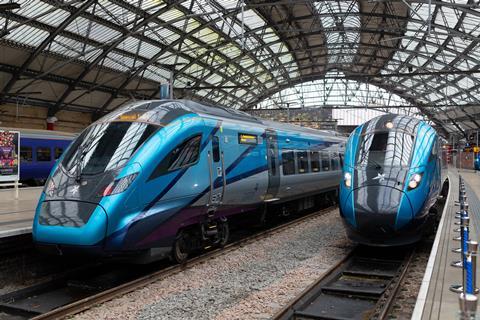 Nova 1 comprises 19 five-car Class 802 electro-diesel trainsets to operate between Liverpool, Manchester, Newcastle and Edinburgh via the East Coast Main Line. Designed to operate at up to 200 km/h, these have been manufactured by Hitachi and funded by Angel Trains.

Nova 2 is a build of 12 five-car non-tilting Class 397 EMUs for 200 km/h operation on the West Coast Main Line routes from Liverpool and Manchester Airport to Glasgow and Edinburgh via Carlisle. Procured by Eversholt Rail, these have been manufactured by CAF and will be maintained by Alstom.

East-west services between Liverpool, Manchester, Leeds, York, Scarborough and Middlesbrough will be worked by the 13 Nova 3 sets. Also supplied by CAF, these five-car push-pull trainsets of Mk 5A coaches financed by Beacon Rail will initially operate with Beacon-owned Class 68 diesel locomotives subleased from Direct Rail Services.

The first Nova 3 sets entered service on August 24, displacing three-car Class 185 DMUs to strengthen other services. The Nova 1 bimodes began carrying passengers from September 28, while the Nova 2 EMUs are currently undertaking driver training; they are due to displace four-car Class 350/4 EMUs with effect from the December 15 timetable change. 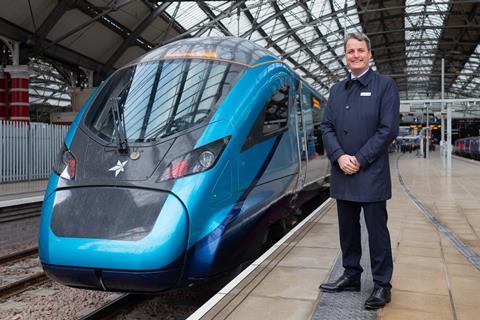 ‘Our vision was for Nova to represent the brightest future for rail in the north’, said TPE Managing Director Leo Goodwin. ‘The name reflects the positive changes that will truly transform rail travel for our customers.’