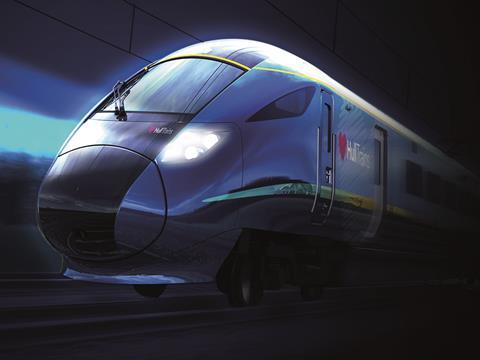 Hull Trains has revealed that its five Hitachi AT300 electro-diesel trainsets will be branded the ‘Paragon’ fleet. Paragon is the traditional suffix of Hull’s main and now only station. Entry to service is planned from mid-November.

TransPennine Express put the first of its 13 Nova 3 trainsets into passenger service on August 24, with the first public train being the 05.55 Manchester Victoria to Liverpool Lime Street. Each push-pull set comprises five CAF Mark 5A coaches and a DRS Class 68 locomotive.

Southeastern has begun consultation on its proposals for the December 2019 timetable. These are intended to speed up journeys between Ashford and Canterbury West following work to increase the line speed undertaken by Network Rail with funding from Kent County Council. Journeys on some main line services would be reduced, while boarding times at ‘a limited number’ of stations would be increased to reflect increased passenger numbers. The operator is proposing to withdraw its three daily peak trains calling at Ore from May 2020, as the station is served by Southern and it believes its rolling stock could be better deployed elsewhere.

Network Rail and Strail are resurfacing a level crossing at Whittington in Shropshire with a harder-wearing rubber material to reduce traffic noise. Inner panels spring back into place after a train passes, providing safer passage for cyclists and disabled pedestrians. ‘This essential work will improve the resilience and reliability of the level crossing and increase its lifespan for years to come’, said Sean Wootton, Programme Manager for Network Rail Wales & Borders.

The modernisation of White Hart Lane station in northeast London to make it ‘bigger, brighter and more accessible’ is nearing completion. Two new entrances provide better access to the ticket hall, and two lifts are to open shortly. The work was undertaken by Taylor Woodrow on behalf of Transport for London. ‘Its unique design acknowledges the history of the area but provides modern day facilities, including more station capacity which will be vital on event days, step-free access and more ticket vending machines’, said Rory O’Neill, TfL’s General Manager for London Overground.

The Seatfrog app, which allows passengers to bid in auctions for unsold first class seats, is now available on GWR services.

West Midlands Combined Authority has extended for a further 12 months a pilot scheme giving residents aged 16 to 18 half-price travel on trains, trams and buses. Transport for West Midlands pays operators a subsidy to contribute towards the cost of the discount.

On August 27 Mick Cash was re-elected as General Secretary of the RMT union for a further five year term. ‘My message to the employers is simple, this trade union will leave no one behind in the pursuit of workplace justice and we will stand and fight wherever that principle comes under attack’, he said. ‘We have made huge strides over the past five years and as the list of on-going disputes shows very clearly we are united moving forwards as a militant, democratic and campaigning trade union that is all about fighting and winning.’

Susie Homan has joined the Rail Delivery Group as Director of Planning, Engineering & Operations. She was previously Customer Service Director at Australian light rail operator KDR Gold Coast, and before that worked for Network Rail, National Express, Thameslink and Northern.