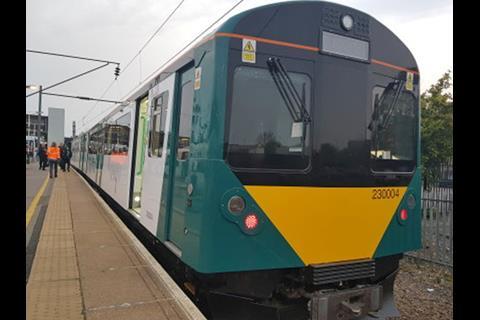 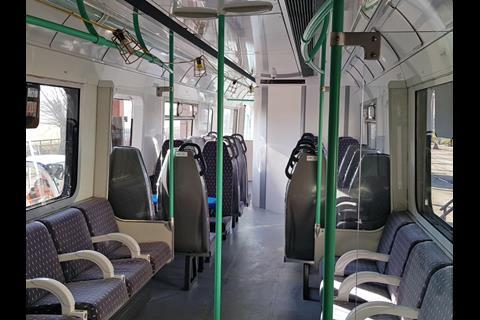 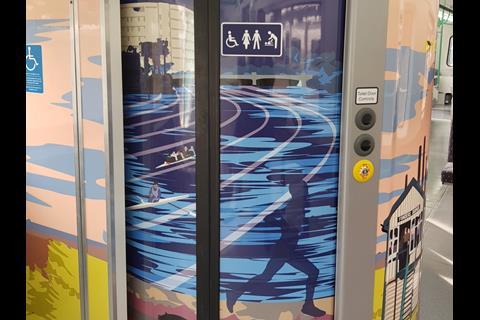 The Abellio-led franchise operator ordered the three two-car units from Vivarail to provide extra capacity and improved customer amenities, including accessible toilets and USB sockets at every seat. The remaining two sets are expected to enter service in the coming weeks. The new timetable which starts next month will provide an hourly service each way on Monday to Saturday, with Sunday trains to be introduced from 2021.

The Class 230 DMUs have been converted from London Underground D78 metro stock, originally manufactured by Metro Cammell in 1980. The aluminium bodyshells have been retained, but the interiors have been extensively refurbished. Power is supplied by two underfloor genset modules on each vehicle, which incorporate a 3·2 litre Ford Duratec diesel engine. The traction control system developed by Strukton Rail uses IGBT choppers, with the traction control electronics and battery charger integrated in one box. A state-of-the-art remote condition monitoring system is also fitted. Maximum speed is 97 km/h.

Vivarail claims that the fuel consumption is roughly half that of a Class 14X Pacer diesel multiple-unit. This is supported by the use of stop-start technology, which sees the engines shut down when not needed, such as at stations or when stabled, although one engine will remain operational for battery charging. The designers say that having four separate engine modules would enable a train to operate at near full power even if one engine should fail. The design of the traction package allows the trains to be maintained locally, rather than needing to return to a depot. Individual engine modules can be exchanged in 10 min with just three operations: disconnecting the fuel and air hoses; unhooking the safety catches and lifting out the module using a pallet truck. Current estimates are that a full engine change would only be needed every 250 000 to 300 000 km.

LNR Customer Experience Director Jonny Wiseman said the Class 230 was ‘a fantastic addition to our fleet’, noting that ‘there has been a lot of anticipation for the introduction of the D-Trains from staff, commuters and the local community, and we hope that our passengers find them comfortable and welcoming to travel on. These trains are unrecognisable from their former life on the Underground; Vivarail has created a modern and comfortable train, ideal for this route.’

Describing the start of passenger service as ‘a very proud day for all at Vivarail’, CEO Adrian Shooter explained that ‘our design and engineering work has been focused on ensuring the Marston Vale trains are of the quality and standard that passengers deserve. Our partners at London Northwestern Railway have worked tirelessly with us to bring these trains into service and I thank them for all the support and faith they have shown in us as we have grown from a start-up business into a full train manufacturer in such a short space of time.’

The D-Trains feature a modified LNR livery, together with artwork from local artist Alisha Miller to be displayed inside each of the three units.