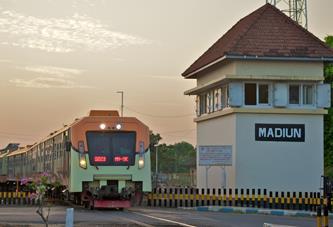 INDONESIA: Japan Transportation Consultants has been awarded a US$15m contract by the Directorate-General of Railways to supervise the double-tracking of 76 km of the southern trans-Java main line.

The award of the marks a further stage of work to enhance capacity and reduce journey times on the main line between Cirebon and Madiun. The section to be doubled is between Kutoarjo and Kroya, a significant junction where routes to Cilecap and Bandung diverge from the Cirebon – Solo line. The 184 km between Solo and Kutoarjo was completed last year, according to Leon Muhammad, Secretary-General at the Ministry of Transport.

The railway directorate hopes to complete the 655 km double-tracking project by the end of 2017. Tenders for the remaining work packages have still to be issued; these would cover the section between Solo and Madiun as well as the route between Kroya and Cirebon via Prupuk.